Today we have the blog tour of GOT IT BAD! Check out the sexy new release and be sure to grab your copy today! 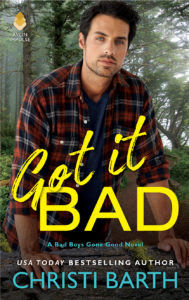 Title: GOT IT BAD

About GOT IT BAD:

Kellan Maguire's on the run from the mob, living a secret life. The only bright spot is his U.S. Marshal handler. Yeah, he wants to handle her....a lot. And in spite of all the rules it would break, Federal Marshal Delaney Evans secretly fears she’d risk everything for one night with Kellan. Even though Delaney’s career, her entire world, could implode if she admits how important he is to her. And all that is before the biggest complication of all hits...


Kieran planned to celebrate his freedom, for the next few hours at least, by finding someone sexy and sassy and talking her into a drink. No talk about tort law. No case law. No law, period.

Flirting. That’s what was on the docket. Kieran didn’t need his four years of undergrad or three years of law school when it came to his mastery of romancing the fairer sex. He’d been charming women out of their tops, bottoms, and everything underneath since . . . well, since long before his brothers actually thought he’d lost his virginity.

He looked down Superior Street for a hot prospect. Pretty much any woman that he didn’t recognize from law school would do. Kieran almost jolted when his gaze connected with two blue eyes staring right at him. Very blue, long-lashed, and with a single, I’m interested raised eyebrow.

“Oh, hey there,” the woman said and then she added an upward, flirty-as-hell tilt to her mouth that sealed the deal. She had noticed him.

This was a million times better than trying to stay awake in Criminal Procedures class. Plus, she was unexpected. Kieran fucking loved surprises.

“Hi yourself, beautiful. Are you hanging around the law school because you need a lawyer? Or because smart men with enormous earning potential turn you on? Either way, I’m your man.”

Her smile flipped downward into a disapproving smirk. “Wow. Has that line ever worked? I mean, ever? There’s four huge problems with the four sentences you just smarmed at me.”

“Didn’t you hear? You can make anything a verb these days. The grammar police officially gave up when squeed got added to the OED.”

Surprise Girl was definitely around his age. Definitely his type, what with the sass and the smarts.

Definitely hot, with those wide, pink-glossed lips that begged to be kissed and thick blond hair that fell just below her shoulders. Kieran really wanted to slide his fingers through it, tug just hard enough so that her head tilted back and he could skim his lips along her throat. And he’d glimpsed one hell of a body wrapped up in a cream sweater and jeans before locking his eyes respectfully above her chin. Oh, and those knee-high brown leather boots that were the best god-damned thing about autumn in the Midwest.

He crossed his arms over his chest. “So what are your official complaints with what I said?”

A super slo-mo blink indicated that she’d expected an apology, and been surprised by his challenge. Then she shoved up the sleeves of her sweater with a determined squint. Game on.

“You can’t assume I’m ‘hanging around’ the law school. I just saw you come out the door, which means you have zero knowledge of where I’m coming from or going. And I just came from a walk on the lakeside trail, so in fact, you’re wrong.”

Feisty was more fun than overtly flirty in Kieran’s book. He shrugged, just to egg her on. “Okay, that’s one.”

She tossed her head. The motion sent her hair rippling in the late-afternoon sunlight. Exactly the way it’d ripple if Kieran flipped her on top of him in a bed.

USA TODAY bestselling author Christi Barth earned a Masters degree in vocal performance and embarked upon a career on the stage. A love of romance then drew her to wedding planning. Ultimately she succumbed to her lifelong love of books and now writes award-winning contemporary romance, including the Naked Men and Aisle Bound series.

Christi can always be found either whipping up gourmet meals (for fun, honest!) or with her nose in a book. She lives in Maryland with the best husband in the world. 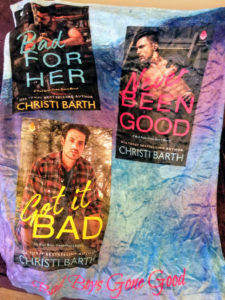 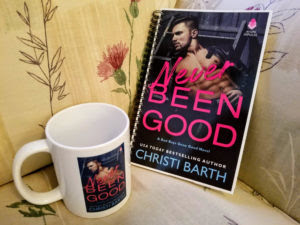