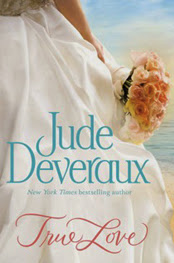 Just as Alix Madsen is finishing up architectural school, Adelaide Kingsley dies and wills her, for one year, the use of a charming nineteenth-century Nantucket house. The elderly woman’s relationship to the Madsen family is a mystery to the spirited Alix—fresh from a romantic breakup—but for reasons of her own Alix accepts the quirky bequest, in part because it gives her time to plan her best friend’s storybook wedding.

But unseen forces move behind the scenes, creaking Kingsley House’s ancient floorboards. It seems that Adelaide Kingsley had a rather specific task for Alix: to solve the strange disappearance of one of the Kingsley women, Valentina, more than two hundred years ago. If that wasn’t troubling enough, Alix must deal with the arrogant (and extremely good-looking) architect Jared Montgomery, who is living in the property’s guesthouse.

Unbeknown to Alix, Jared has been charged with looking after her while she lives on the island—an easy task for him, considering the undeniable chemistry between the two. But Jared harbors secrets of his own, which, if revealed, may drive a wedge between the pair.

With a glorious Nantucket wedding on the horizon, sparks fly, and the ghosts of the past begin to reveal themselves—some of them literally. Finding their lives inextricably entwined with the turbulent fortunes of their ancestors, Alix and Jared discover that only by righting the wrongs of the past can they hope to be together.(

The new Montgomery-Taggert series by Deveraux did not disappoint.

When Addie passes away and a request in her will is for Alix Madsen to come and stay at her house for one year, Alix hesitates, until her boyfriend dumps her.

Alix comes to Nantucket with her best friend to heal and help her friend plan her wedding. On picturesque Nantucket, magical things start to happen.

Alix is an architecture student, trying to get her portfolio together. She realizes that the house she is staying in is one owned by her someone she idolizes, Jared Kingsley Montgomery.

This is a book of secrets kept, lost love, ghosts and true love.

Jude Gilliam was born September 20, 1947 in Fairdale, Kentucky. She has a large extended family and is the elder sister of four brothers. She attended Murray State University and received a degree in Art. In 1967, Jude married and took her husband's surname of White, but four years later they divorced. For years, she worked as 5th-grade teacher.

She began writing in 1976, and published her first book, The Enchanted Land (1977) under the name Jude Deveraux. Following the publication of her first novel, she resigned her teaching position. Now, she is the author of 31 New York Times bestsellers.

Jude won readers' hearts with the epic Velvet series, which revolves around the lives of the Montgomery family's irresistible men. Jude's early books are set largely in 15th- and 16th-century England; in them her fierce, impassioned protagonists find themselves in the midst of blood feuds and wars. Her heroines are equally scrappy -- medieval Scarlett O'Haras who often have a low regard for the men who eventually win them over. They're fighters, certainly, but they're also beauties who are preoccupied with survival and family preservation.

Jude has also stepped outside her milieu, with mixed results. Her James River trilogy (River Lady, Lost Lady, and Counterfeit Lady) is set mostly in post-Revolution America; the popular, softer-edged Twin of Fire/Twin of Ice moves to 19th-century Colorado and introduces another hunky-man clan, the Taggerts.

Deveraux manages to evoke a strong and convincing atmosphere for each of her books, but her dialogue and characters are as familiar as a modern-day soap opera's. "Historicals seem to be all I'm capable of," Jude once said in an interview, referring to a now out-of-print attempt at contemporary fiction, 1982's Casa Grande. "I don't want to write family sagas or occult books, and I have no intention of again trying to ruin the contemporary market." Still, Jude did later attempt modern-day romances, such as the lighthearted High Tide (her first murder caper), the contemporary female friendship story The Summerhouse, and the time-traveling Knight in Shining Armor. In fact, with 2002's The Mulberry Tree, Deveraux seems to be getting more comfortable setting stories in the present, which is a good thing, since the fans she won with her historical books are eager to follow her into the future.

Jude married Claude Montassir, with whom she had a son, Sam Alexander Montassir, in 1997. They eventually divorced. On Oct. 6th, 2005, Sam died at the age of eight in a motorcycle accident.

Jude has lived in several countries and all over the United States. She currently lives in Charlotte, North Carolina and has an additional home in the medieval city of Badolato, Italy.

I was given this book to review in exchange for an honest opinion.

Thanks to the Publisher, I am able to offer 3 Paperback copies as a giveaway.

Winners have 48 hours to respond or another winner will be chosen. US only

BEHIND HIS EYES ~ ALEATHA ROMIG 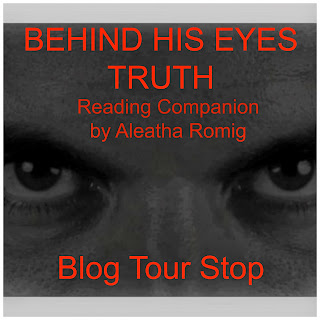 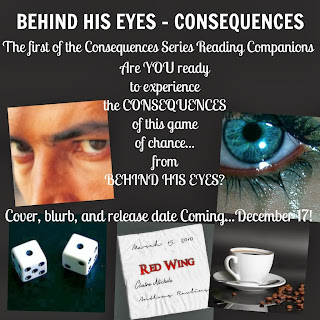 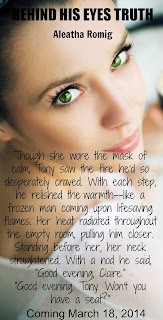 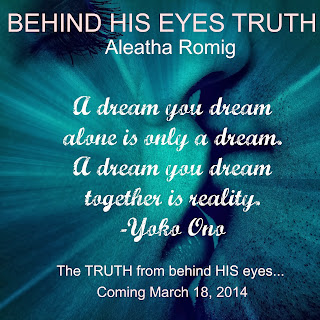 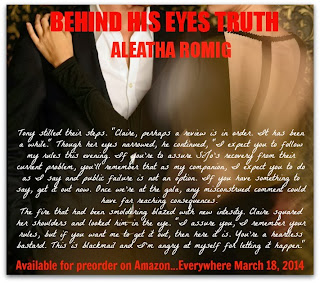 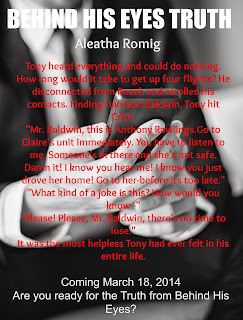 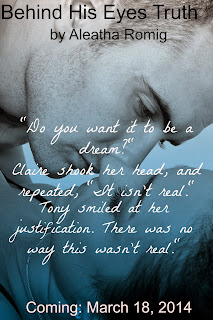 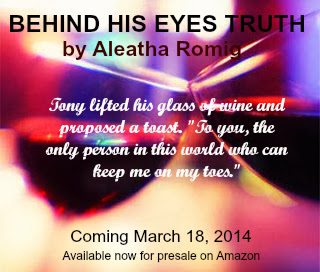 BEHIND HIS EYES TRUTH is the second of CONSEQUENCES SERIES three reading companions, by New York Times and USA Today bestselling author Aleatha Romig. It is recommended to be read after completing all of the CONSEQUENCES SERIES: Consequences, Truth, and Convicted. It is not a standalone book and should not be read as such.
This reading companion explores the thoughts and motivations of Anthony Rawlings and his struggle to accept the truth behind the consequences. It is not intended as a total rewrite of TRUTH, but meant to enhance the reader’s understanding. BEHIND HIS EYES TRUTH contains significant scenes from the novel TRUTH, as experienced from Anthony’s point of view. It also contains never before read, behind the scenes information, a glossary of the characters, and a timeline which grows from Consequences to include the array of new characters and revelations found in the pages of Truth.
BEHIND HIS EYES TRUTH is the continued journey inside the mind of the man who supplied and survived the consequences. This companion allows readers the opportunity to witness first hand as Anthony’s world changes forever. His rules and control begin to slip away, threatened by the most unlikely foes—something completely unfamiliar.
Can something as pure as love and forgiveness wreak havoc on his well-planned existence?
BEHIND HIS EYES TRUTH, because there is more to learn about a man who:
Once upon a time, signed a napkin that he knew was a contract. As an esteemed businessman, he forgot one very important rule—he forgot to read the fine print. It wasn’t an acquisition to own another person as he’d previously assumed. It was an agreement to acquire a soul.
—Aleatha Romig, CONVICTED

Continue the long and painful acquisition, as the TRUTH becomes evident, from Behind His Eyes!

Glancing at the numerous pictures from his years of surveillance, Tony wondered if he and Claire had come full circle. Would it be like this again? Would his only connection to her be through this new investigator? Would he only see Claire in two dimensions? Tony searched for their contract, the beginning of their personal journey together. He knew it wouldn’t be that easy again. If he were to get her back to Iowa and into his life, it wouldn’t be because of a signature on a napkin.
Then he shook his head. He didn’t want her back, did he? Hell, the lack of sleep was making him sentimental. He stopped his search. The damn contract was no longer valid; it never had been—legally. Pushing the box back into its hideaway, he contemplated throwing it all away. Having her back wasn’t his goal; learning her location was. She had no right to disappear.
With the necklace in his hand, Tony settled upon the soft leather sofa in front of his fireplace. If Phillip Roach were correct, in a few moments he’d hear the voice that used to fill his suite and his house. When her voice came through his phone, Tony wanted to feel her presence. He imagined the sound as he looked up at her wedding portrait and saw the emerald green that haunted his dreams. What did he want to hear? He wanted to know she was safe and unharmed. He wanted to know where she was, and he also wanted to bring her back to Iowa—because that was where she belonged.
It didn’t make sense. To the world she was the woman who tried to kill him. To Tony she was more than that. The past twenty hours had proven it. She was his drug. Claire Nichols ran through his system like ecstasy, sending him on otherwise unobtainable highs. He reasoned that lows followed highs, and she’d given him those, too; they’d given them to each other. Nevertheless, without the right stimulant, the euphoria could never again be achieved. Whether it was elation or misery, neither would be obtainable without the exhilarating potency of Claire. He didn’t want an empty envelope. He wanted her. Nathaniel was wrong: Claire wasn’t gone; she was just misplaced.
For the last twenty-four hours, his entire being had surged with anticipation. Claire may not understand it—hell, Tony didn’t understand it, but he couldn’t deny it. Now that she was gone, he needed her back in his life, and he would have her.

Aleatha Romig is a New York Times and USA Today bestselling author, who has been voted #1 "New Author to Read" on Goodreads, July 2012 - Present!

Aleatha has lived most of her life in Indiana, growing-up in Mishawaka, graduating from Indiana University, and currently living south of Indianapolis. Together with her high-school sweetheart and husband of twenty seven years, they've raised three children. Before she became a full-time author, she worked days as a dental hygienist and spent her nights writing. Now, when she’s not imagining mind-blowing twists and turns, she likes to spend her time with her family and friends. Her pastimes include exercising, reading, and creating heroes/ anti-heroes who haunt your dreams!

Aleatha enjoys traveling, especially when there is a beach involved. In 2011 she had the opportunity to visit Sydney, Australia to visit her daughter studying at the University of Wollongong. Her dream is to travel to places in her novels and around the world.

Aleatha is a “Published Author’s Network” member of the Romance Writers of America and represented by Danielle Egan-Miller of Brown and Miller Literary Associates.

Here is the presale link for this awesome book: http://www.amazon.com/Behind-His-Eyes-Truth-Consequences-ebook/dp/B00HOIH3XS/ref=sr_1_6?s=digital-text&ie=UTF8&qid=1394491560&sr=1-6&keywords=consequences+romig
Posted by Jax's Book Magic at 12:24 PM No comments: