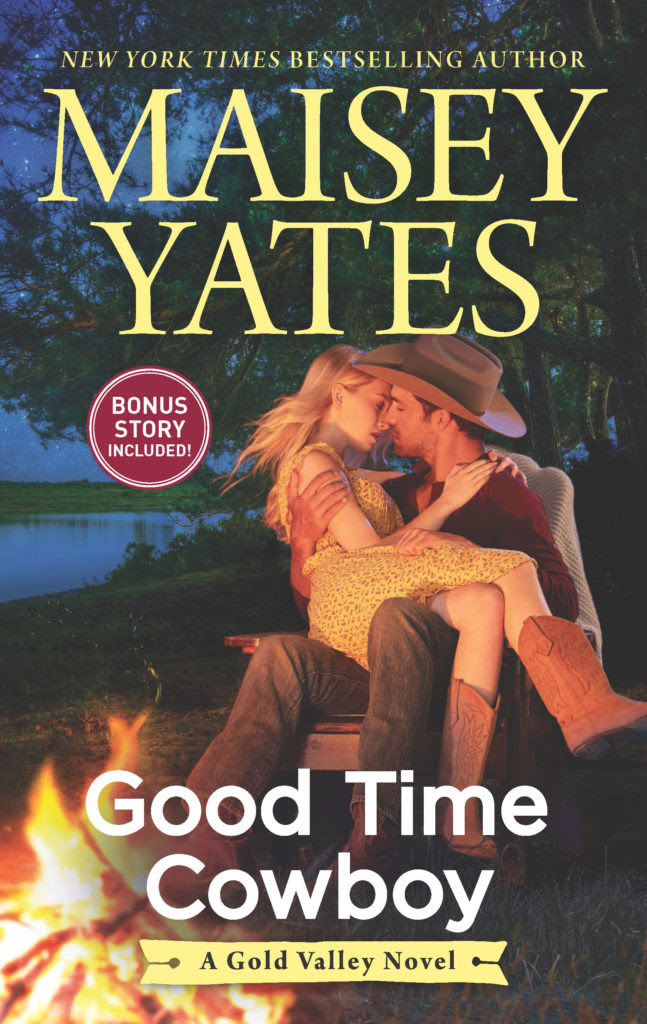 In Gold Valley, Oregon, forbidden desire just might turn into the love of a lifetime…

When Lindy Parker lost her cheating husband, she gained a vineyard. She’ll do anything for Grassroots Winery, including teaming up with the hottest devil she knows, rancher Wyatt Dodge. Wyatt is her ex’s friend and has an ego as big as the bulls he rides. But in spite of that, disciplined Lindy has always wanted him…

Lightning struck Wyatt Dodge the first time he saw Lindy Parker. But there were two problems with that: she was married to his friend, and Wyatt doesn’t do strings. But now Lindy is free, and the two of them can finally explore the heat that’s burned between them for so long. But can Lindy make this good time cowboy decide on forever? 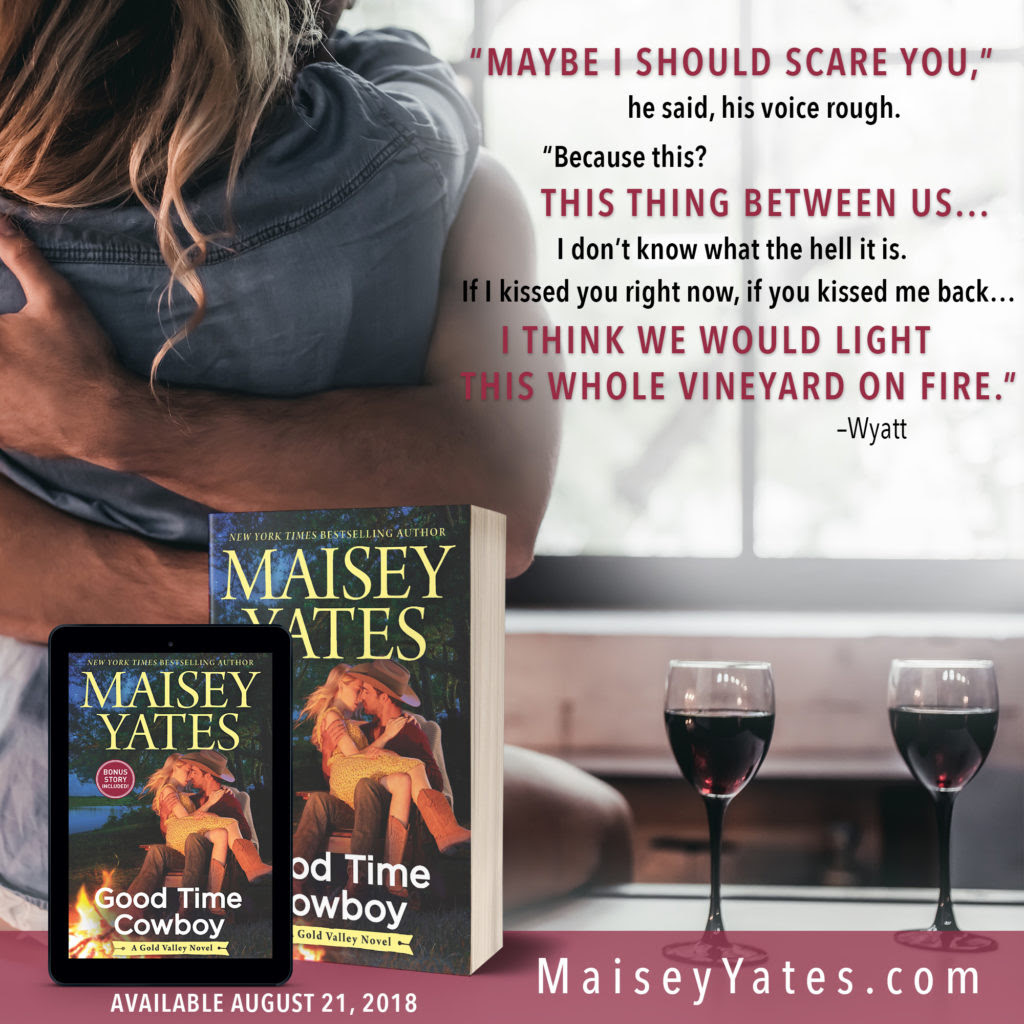 Add it to your Goodreads Now!

LINDY PARKER HATED the rodeo. Just in general. The sights, the smells, the cloud of testosterone that covered everything.

She hadn’t always hated it, but now it all reminded her of her ex-husband. Damien was so firmly part of that world to her. Whenever she’d gone to rodeo events, it had been for the sole purpose of seeing Damien’s work. To see the results of PR campaigns he’d run and to rub elbows with possible sponsors.

The rest of it didn’t much appeal to her. Dirt and bright lights and overly loud announcers.

But if there was one thing she hated more than the rodeo itself, it was the bull riders.

Even her younger brother, Dane, suffered from a bad case of it when he’d been out on the circuit for too long.

But there was no bull rider who irked her quite like Wyatt Dodge. Her dear ex’s favorite rider. A man who’d made Damien tons of money and inflated his ego beyond the telling of it, which, in her humble opinion, had contributed to the flagrant affair her husband had engaged in with a woman who had—at the time—worked at Grassroots Winery, and had been young enough that she still probably remembered how to get to Sesame Street.

Not that it was Wyatt Dodge’s fault. No, Damien was responsible for his own body parts and where they wandered. He was the one who had made vows to her, and even if she did feel like perhaps his prolonged exposure to a pack of manwhores hadn’t helped her marriage, she knew exactly where the fault lay for what had transpired.

She’d caught him kissing an employee of their winery. A much younger employee. Sarabeth, who Lindy had considered a casual friend. A woman she’d invited into her home. A woman she’d paid an hourly wage to. And apparently some of those hours had been spent in bed with Lindy’s husband.

And Lindy could hold a grudge. And had. All the way to court, where she had managed to get full ownership of Damien’s family winery, Grassroots Winery.

Jamison Leighton and his wife had been unsurprisingly angry at the way all that had gone. But, they shouldn’t have left the entire thing to a son who didn’t know how to keep it in his pants. Particularly not a son who had signed a very foolish prenuptial agreement, designed only to protect him from her. Which had meant that all bad behavior stipulated in said agreement had been based on the assumption that she would be the one to do all the very bad things.

And so, she had emerged victorious. She’d given more power back to his sisters, who had not had a chance to claim any part of the property from his parents, but who had stood by her side through the ordeal.

She was close to Sabrina and Bea, in spite of the fact that they were blood-related to Damien. They were the sisters of her heart, and they all worked together even now.

She loved the winery, but unfortunately it was that work that brought her to the Get Out of Dodge ranch now—and was bringing her into contact with a man that she liked less than cooked carrots.

Lindy gritted her teeth and parked her little red car in the gravel lot. She questioned her decision-making sometimes. The fact that she’d come to Wyatt with the idea of the joint barbecue that would hopefully increase business at both Grassroots and Get Out of Dodge. A barbecue that would showcase the grounds of the dude ranch and the wines from Grassroots, and educate people on the different activities available at both locations.

But it made sense. Business sense, anyway. And she’d felt like it would be shortsighted to let her feelings for Wyatt—both her irritation and the strange tightening she felt in her stomach whenever he was around—hinder an important business decision.

Back in the day, Get Out of Dodge had been a thriving dude ranch, bringing people in for miles. But then, Quinn Dodge had lost his wife, and the tragedy had made it difficult for him to continue running the place at that capacity. Since then, the ownership had passed to Quinn’s son, Wyatt, who had retired from the rodeo circuit. He was working on bringing it backto its former glory, modernizing it and creating a place that would cater to what guests wanted now.

Lindy felt like she was very much doing the same with Grassroots. Now that it was in her control she was doing all the expanding she had wanted to do when she and Damien had been married. He had been just happy to live in a big house and let the winery bump along, making income as it had always done.

Not Lindy. Lindy had come from nothing, and she didn’t take a thing for granted.

All that mattered was the future.

And getting through all of it without killing Wyatt. 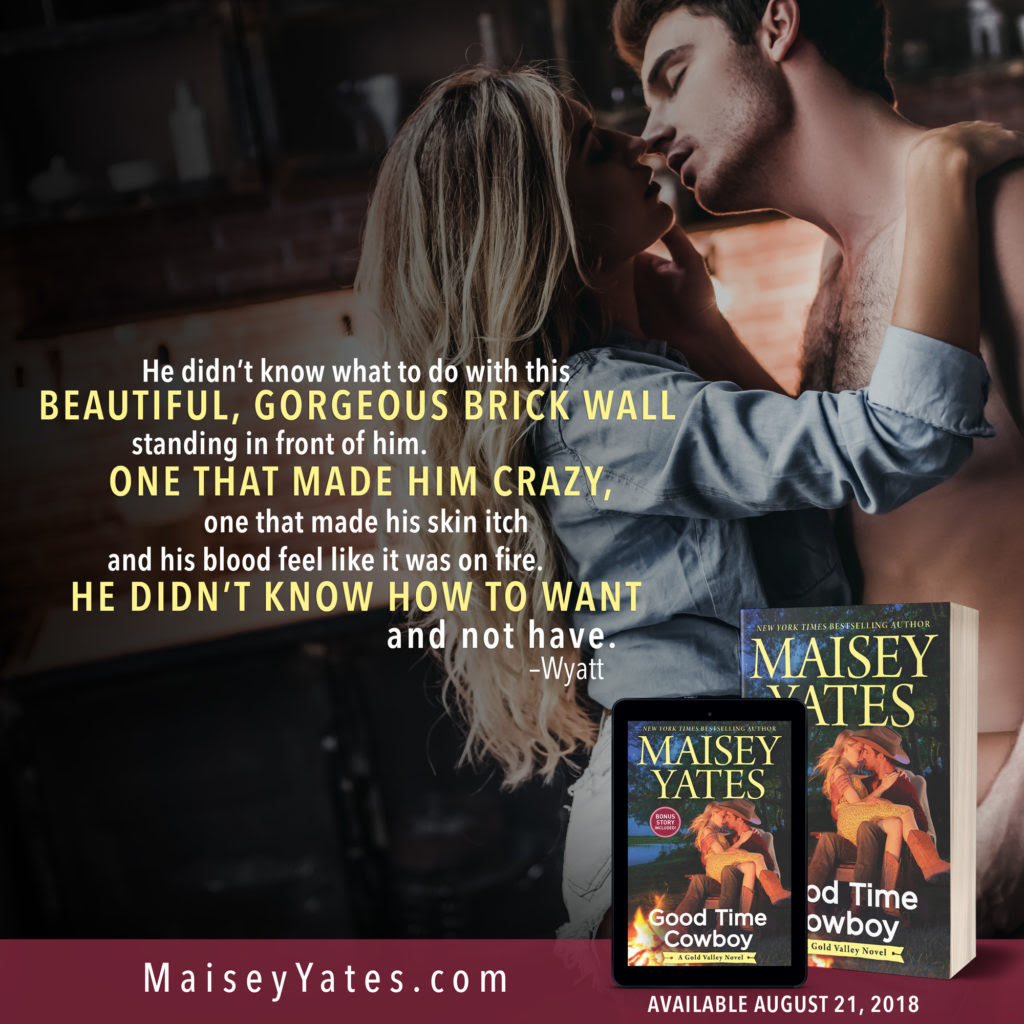 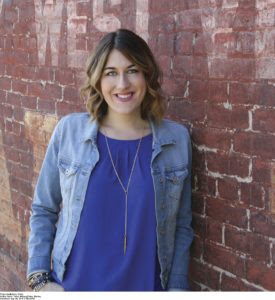 New York Times and USA Today Bestselling author Maisey Yates lives in rural Oregon with her three children and her husband, whose chiseled jaw and arresting features continue to make her swoon. She feels the epic trek she takes several times a day from her office to her coffee maker is a true example of her pioneer spirit.

In 2009, at the age of twenty-three Maisey sold her first book. Since then it’s been a whirlwind of sexy alpha males and happily ever afters, and she wouldn’t have it any other way. Maisey divides her writing time between dark, passionate category romances set just about everywhere on earth and light sexy contemporary romances set practically in her back yard. She believes that she clearly has the best job in the world.