Today we have the blog tour for Melissa Foster’s BAYSIDE HEAT! Check out this fantastic new contemporary romance and be sure to grab your copy today! 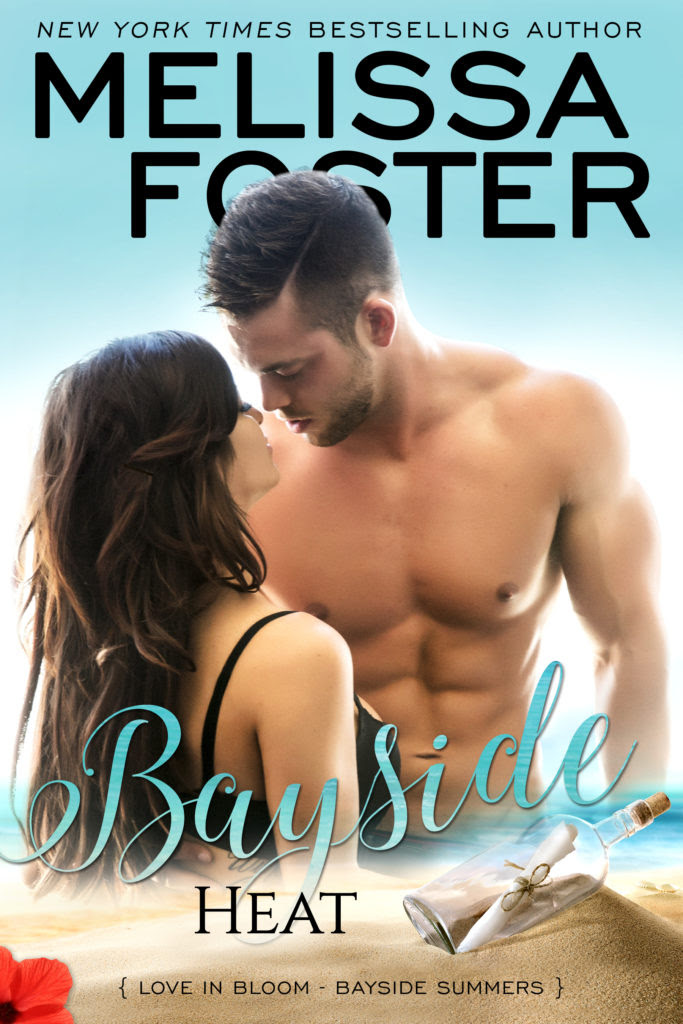 In BAYSIDE HEAT...
Drake Savage has always done the right thing, especially where beautiful and fiercely determined Serena Mallery is concerned-even when it means keeping his feelings for her to himself. Serena has always wanted more than what their small town of Wellfleet, Massachusetts has to offer, and Drake's roots are so deeply entrenched in the Cape, it's all he can do to watch her pack up her life and move away.

Serena has always had big dreams. As a teenager she dreamed of becoming an interior designer and marrying smart, musically inclined, sexy-as-sin Drake Savage. Now she's finally landed a killer job with a top interior design firm, but though she has spent the last four years working side by side with Drake, he's never made a move. Four years is long enough for her to accept reality, and her new job in Boston is the perfect way to move on.

A weak moment leads to sizzling, sensual kisses, opening a door through which they've both been aching to walk. But Serena's determined not to give up her shot at the career she's always dreamed of, and Drake has loved her for too many years to stand in her way. With true love at their fingertips and a world of unstoppable passion igniting between them, can the two star-crossed lovers find their way to their happily ever after?

By the time they reached Undercover, she was nibbling on her lower lip, and that sexy innocence nearly made him detonate.

The lot was packed. He parked at the far end, beneath an umbrella of trees, and turned toward Serena. She was still staring straight ahead, her face a mask of apprehension, which tore at his gut. Was it him, or was it her leaving that was causing her distress?

He took her small hand in his and brushed his thumb over her warm skin, memorizing it to hold him over when she was gone. The gold chain sparkled against her sun-kissed skin. “Talk to me, Serena.”

She turned to face him with worry in her eyes. He gently pulled her across the seat, close enough that he could almost feel her racing pulse between them.

“Aw, sweetheart, what’s wrong? Are you nervous about leaving?”

“Yes,” she said softly. “And about this.” Her gaze fell to the bracelet. “It’s gorgeous and sweet, but it’s also confusing. What does it mean, Drake? On one hand I feel like you’re sending mixed messages by avoiding me all day and then giving me this…” She ran her finger over the chain on her hand. “But on the other hand, you don’t owe me an explanation about what you’re up to at work, and you’ve given me presents before. This should be no different. But knowing how you feel about me makes it different.”

He touched his forehead to hers and slid his hand to the nape of her neck, holding her there as he said, “I’m sorry. I told you I was fucked up right now. I did avoid you today, but only because I can’t stop thinking about”—making you mine, kissing you, sweeping you naked beneath me and loving you until you can’t remember why you wanted to leave in the first place—“things I shouldn’t.”

“Join the club,” she whispered.

His insides flamed at the secret between them. He brushed his lips over her cheek, and she inhaled a ragged breath. It was so sexy, he did it again, earning another seductive inhalation. He drew back so he could see her face, still holding the back of her neck, and she clutched his forearm. Her breasts rose with each heavy breath, and her tongue slicked over her lips, making his mouth water. There was no denying the calculated, seductive move. Nicely played. Their eyes locked, and hers narrowed ever so slightly, suddenly brimming with confidence, and if he was reading her right, which he was damn sure he was, also ripe with challenge.

“You’re going to make a liar of me if you keep looking at me like that.”

“Sometimes a lie isn’t a lie,” she said breathily.

He couldn’t resist pressing his lips to her cheek in a series of light kisses, telling himself her cheek was safe. If he could just have this little taste, he could get through the night and figure out how to lock his desires away again.

Her skin was warm and temptingly soft. She closed her eyes, barely breathing as he kissed her cheek again and again, so trusting and sweet. Her fingers pressed into his skin with every touch of his lips, fueling the battle raging in his head. Just one more. He kissed the tender dip just below her ear, and she sighed dreamily. Fuuuck.

She turned her face, and their lips brushed like a breeze passing over too quickly. The tease ignited sparks beneath his skin. He ran his hand along her thigh, aching to make her his, though knowing he shouldn’t even be tempting himself with the kisses he’d already taken.

She arched toward him, holding his head, keeping his mouth on her neck. Oh yeah. That’s it, baby. Show me you want me. He opened his mouth and sealed his teeth over her tender skin, sucking hard enough for her to gasp. He threaded his fingers into her hair, tugging her head to the side so he could take more of her. Her hand fisted in his hair, pulling hard—but not pulling away—causing a deliciously erotic sting and making his cock throb even harder. He needed to break their connection or he wasn’t going to stop. He’d fought to remain on the right side of the invisible line between them for years, and he was fucking that up. Sending her mixed messages only scratched the surface of why he should break their connection.

Her words, along with the roar of a motorcycle, crashed through his reverie. He released her like he’d been burned. “Bad idea. Right. Sorry.” I’m a fucking prick.

“No—” She grabbed his hand, leaning closer. “This isn’t a bad idea. That’s what the lie is. We’re not making a liar out of you. You just had a bad idea in the first place.”

A series of successive taps on the window made them both jump.

“Fuck.” He rolled down his window, and Violet peered in. “Hey,” he ground out.

Violet’s gaze sailed over Serena, and Drake fisted his hands to keep from shifting in his seat and blocking Violet’s view of Serena’s lust-filled eyes, tousled hair, and pert nipples poking against the thin material of her top.

“You guys coming in?” Violet arched a brow. “Or coming out here?” 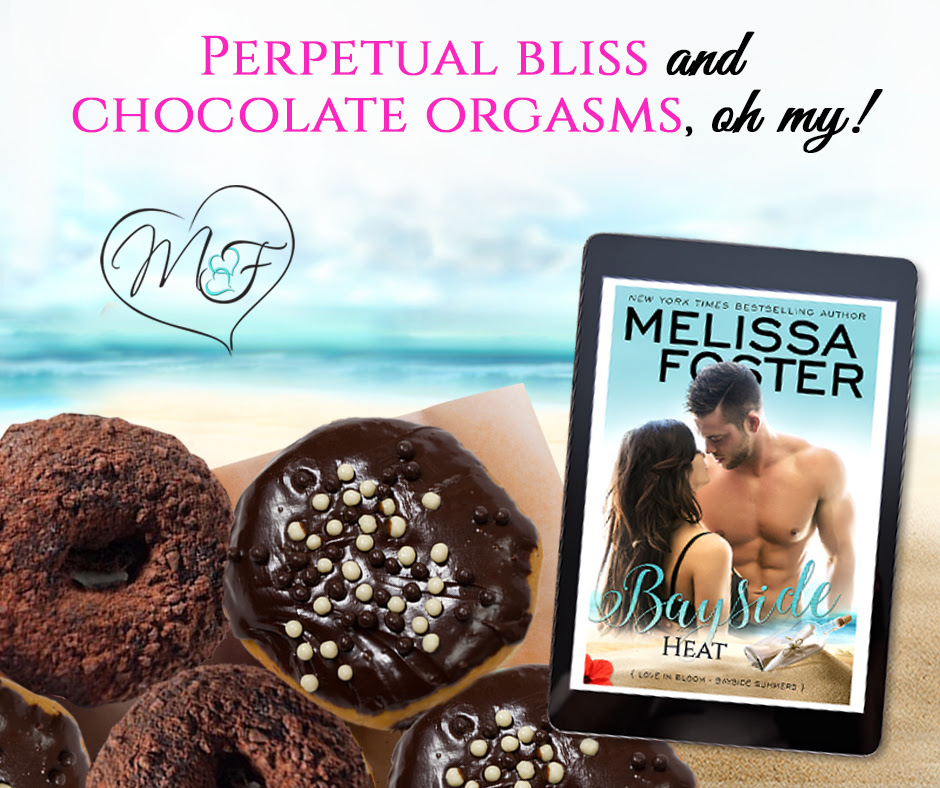 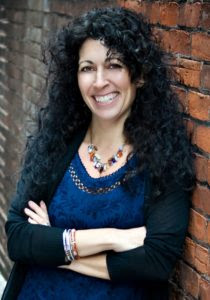 Melissa has painted and donated several murals to The Hospital for Sick Children in Washington, DC. Her interests include her family, reading, writing, painting, friends, helping others see the positive side of life, and visiting Cape Cod.

Melissa is available to chat with book clubs and welcomes comments and emails from her readers. Visit Melissa on social media or her personal website.

Never miss a brand new release, special promotions or inside gossip again by simply signing up to receive your newsletter from Melissa. 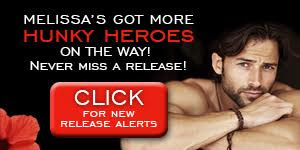 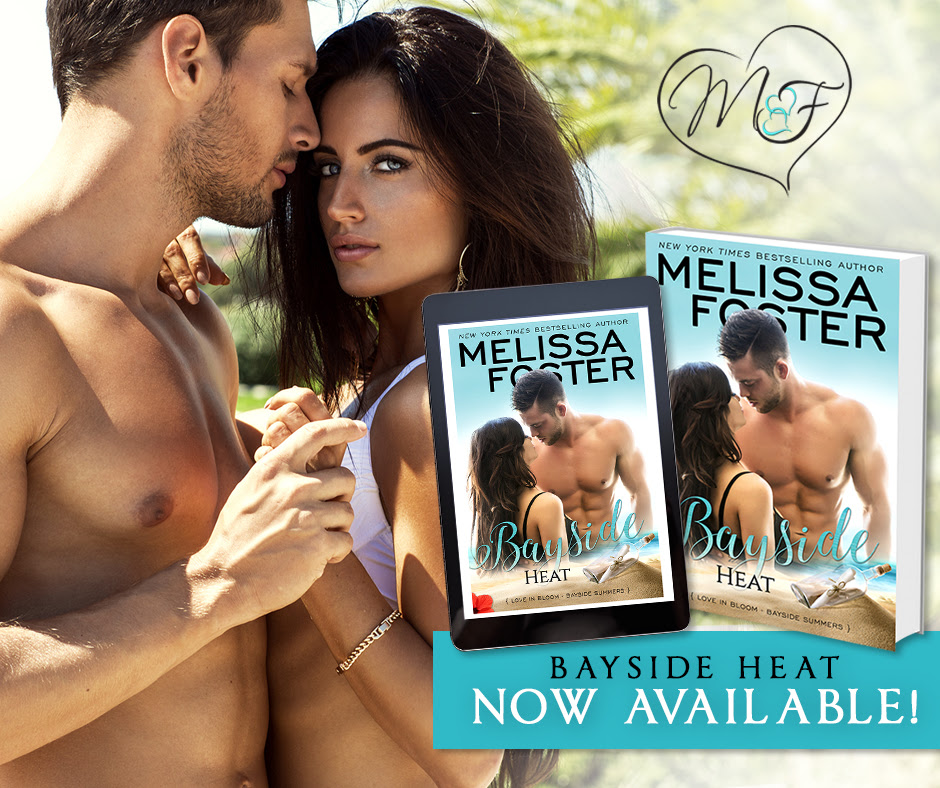