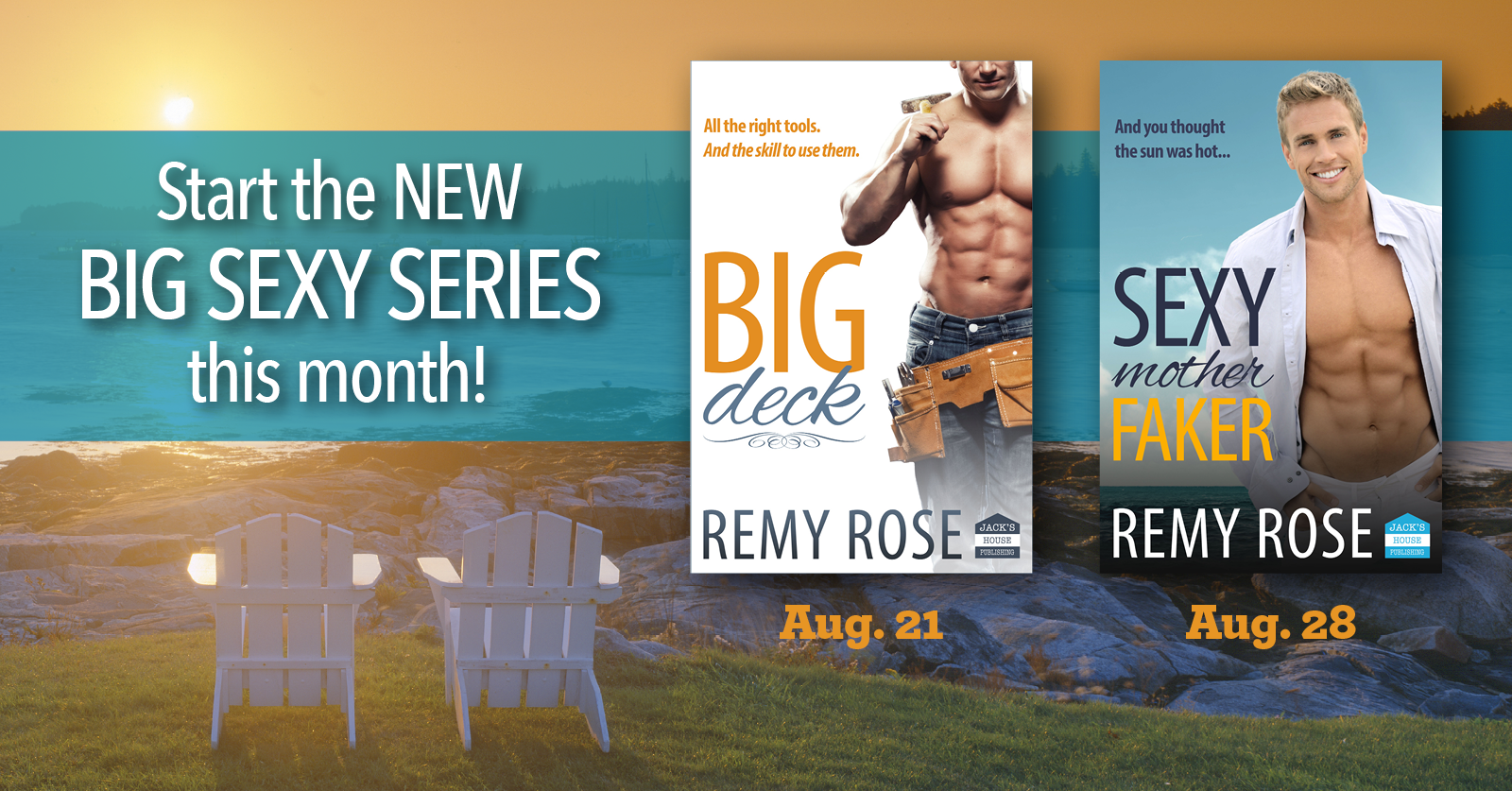 Today we are celebrating the release of BIG DECK by Remy Rose. It is the first book in the Big Sexy Series and the second book in the series, SEXY MOTHER FAKER, will release August 28th! The series is being published by Jack's House Publishing.

Check out the buy links for each title below. 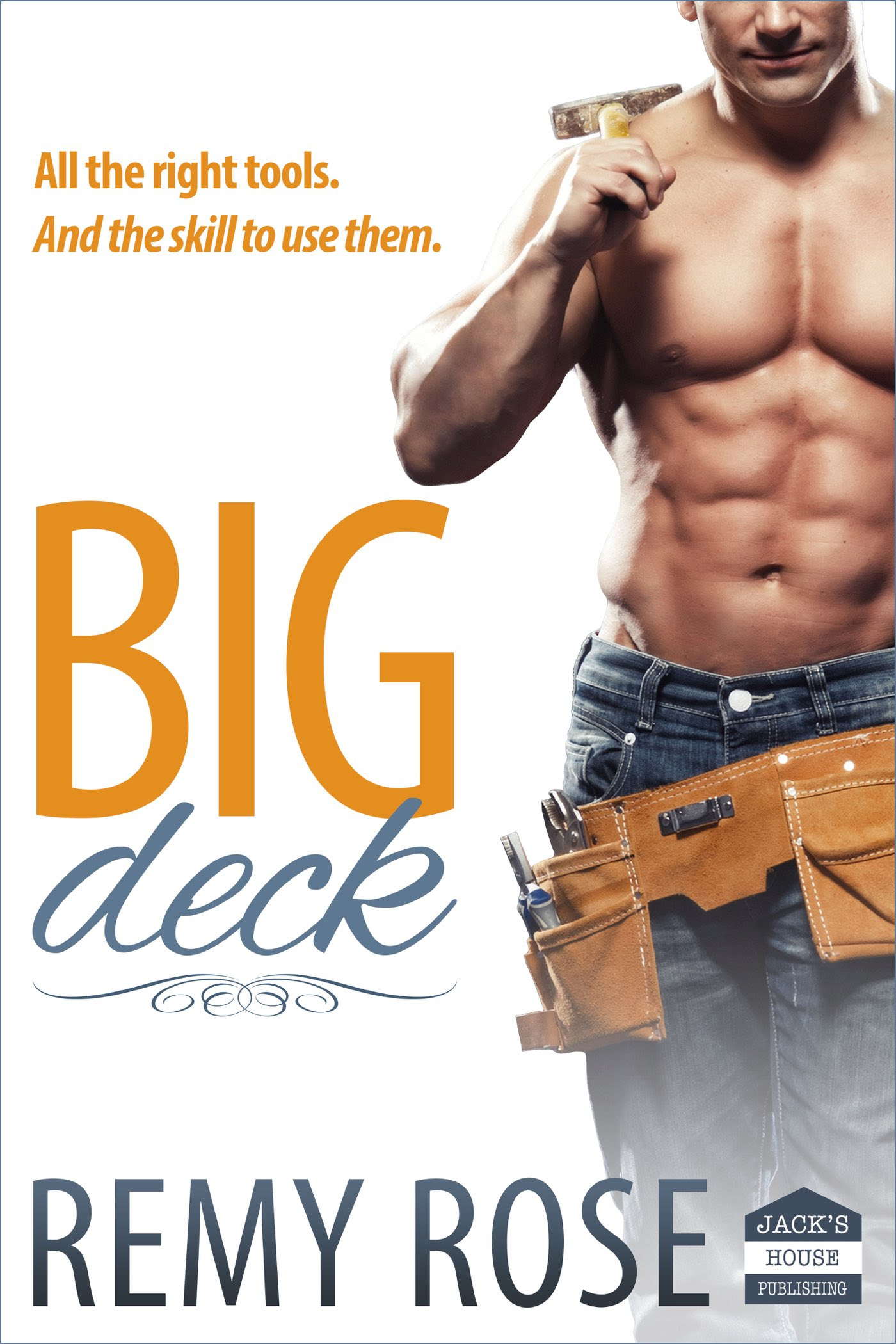 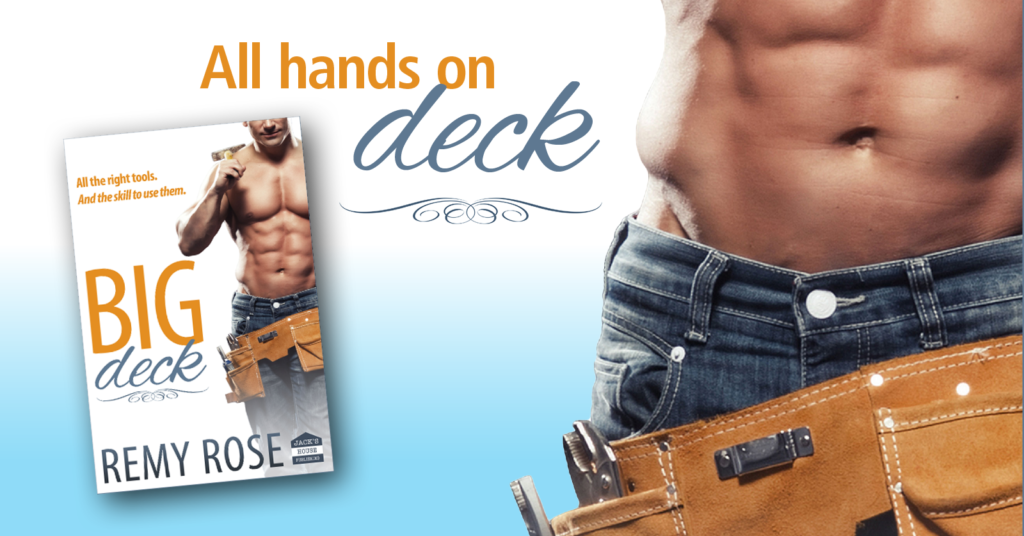 He has all the right tools…and the skill to use them.

Need a carpenter who has all the right tools and the skill to use them? Look no further than me, Jackson Decker…otherwise known as Big Deck. I’ll let you guess how I may have inherited that nickname. Spoiler alert: it’s not just because I’m 6’5″.

I take care of my female clients in many ways. I’ve got tools, and I’ve got rules: three seconds, tops, for hugs. No going on dates. No staying overnight. And absolutely no letting anyone mess with my heart.

I’m yours for the duration of the project. And then, it’s over. Most women find it difficult to say goodbye, and sometimes it’s hard for me, too—literally. See what I just did there? But that’s the way it has to be, and I’ve always been able to handle it.

I was only looking to get a big bathroom, not a big man, since I’ve sworn off relationships after being cheated on. But when Jack Decker showed up at my door with his jaw-dropping sex appeal and huge…um, workboots, I found myself wanting his hands on more than just my bathroom fixtures. I wasn’t prepared for how he’d make me laugh, blush, swoon…ache.

Will I be able to follow our agreement of insanely hot, no-strings sex, keep my emotions in check and let Jack go once he’s done the renovation? Or will I need him to return and repair the hole in my heart?

Want someone who can screw?

Look no further than me, Jackson Decker, of Decker Renovation. I do all that and more. Some people might call me a handyman, but I’m not much into that title. For me, that label always conjures up a guy with a beer gut and his ass crack peeking over saggy jeans as he’s squatting down fixing leaky faucets. I prefer the term “renovation specialist,” although James Taylor did have a nice angle on the whole handyman thing.

I get to make people happy, and I like that.

Like the song says, they’ll come running to me. I’ve been kicking ass with the business—I’ve even been toying around with the idea of expanding, maybe adding a crew, but I’ve only been at this a couple of years, and I’m not sure it’s what I want to do with the rest of my life. I thought I knew before, but things took a detour. Honestly, I’m okay with detours, because sometimes you find your way when you go off the beaten path, if that makes any sense. It didn’t to my father, but I learned that it’s more important to be happy with my own decisions than to please him.

Shit, I’m getting too philosophical for a beauty of a day like this one. Perfect Maine weather: clear, bright blue sky with just a few cotton-ball clouds here and there, seventy-two degrees, and a hint of a breeze. I’ve got the windows to my truck rolled down, partly because I’m not a fan of AC and partly because I want to smell the salt air. I’m driving to meet a new client in Surry—bathroom remodel. We spoke on the phone a couple of weeks ago. First impression—if phone call first impressions count—was that she’s polite, cool, and high maintenance. I sometimes make a game out of predicting what a client will look like, and for Ms. Madeline Callaway, I’m picturing thirty-ish. Tall, thin, pale skin. Dark hair, probably in a bun most of the time. More angles than curves. We’ll see if I’m right.

I always get a kick out of women’s reactions when they first lay eyes on me. They usually look surprised, almost startled, probably because they were expecting someone who looks like the ass-crack guy I described earlier. Some of them get flustered and have trouble looking me in the eye. They think I don’t see them resting their gaze on my mouth, darting their eyes across my chest, or glancing at my crotch and blushing. Jesus, that always gets to me—when women try to hide that they want me. Like they’re back in high school, glowing with innocence but burning with want. I love that.

Being a renovation specialist has some key fringe benefits.

Back to the making-people-happy thing. That most definitely includes women, and I’m talking beyond oh Jack, I love what you did with the tile in the foyer. If the female client and I are both into the idea of hooking up—and I’m talking single women only, by the way. I’d never park my truck in someone else’s garage—I’m more than willing to take out my special tool.

But even though I want things to be fun for both of us, there have to be rules. Three seconds, tops, for hugs. Any longer than that, it starts to feel too intimate and gives both of us the wrong idea. Also, no going on dates, no staying overnight, and no letting anyone mess with my heart. I make it clear, right from the start, this is how it has to be.

It’s all about self-preservation.

So far, the keep-Jack-safe plan has worked out well. It’s never boring, that’s for damned sure. Variety’s the spice of life, right? I keep my options—and my eyes—wide open.

I don’t really have a type—I’m attracted to all different kinds of women: sleek brunettes, spiky redheads, curly blondes. Curvy, tiny, bold, shy. I dig both the softness and fierceness of women, the depth of their feeling and the strength of their resolve. I love to flirt and shock them a little with my bluntness. But I’m all about respect along with good fun. I have no tolerance for guys who mistreat women in any way, and I’ve gotten into some nasty scrapes in bars defending women I don’t even know. Those women are somebody’s daughter, wife, mother, sister. I consider women to be goddesses, and they should be treated as such.

I love getting to know their scents, the feel of their skin under my hands, what makes them gasp. I love the moment when I hook my thumbs in the waistband of their panties, just before sliding them down—the intake of breath from both of us, the anticipation of what her pussy will look like, taste like. One of my favorite things to do is go down on a woman, especially when she’s bare and glistening pink so I can see it all, lick every quivering millimeter of her. It sometimes feels like it’s going to kill me, when I’m eating her and listening to the sounds she’s making, wanting to bury myself deep inside her.But getting high from making her squirm… Pleasing a woman like that is the best kind of ecstasy there is. And I don’t care how much a girl might protest my going down there or act like she’s too pure for it—once she feels what my tongue can do, she’s pretty much putty in my hands.

Little renovation humor there with the putty reference.

I can do that. 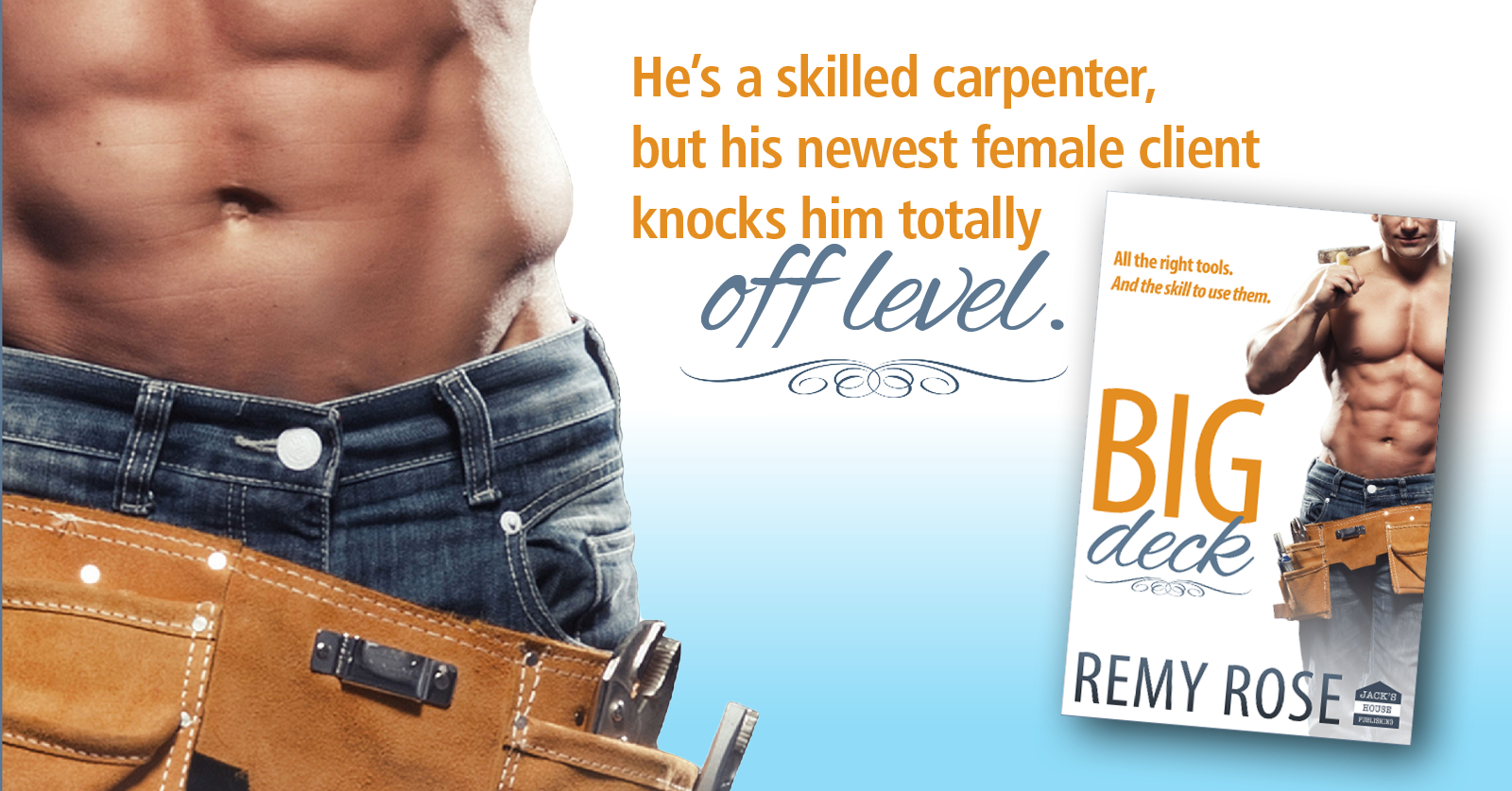 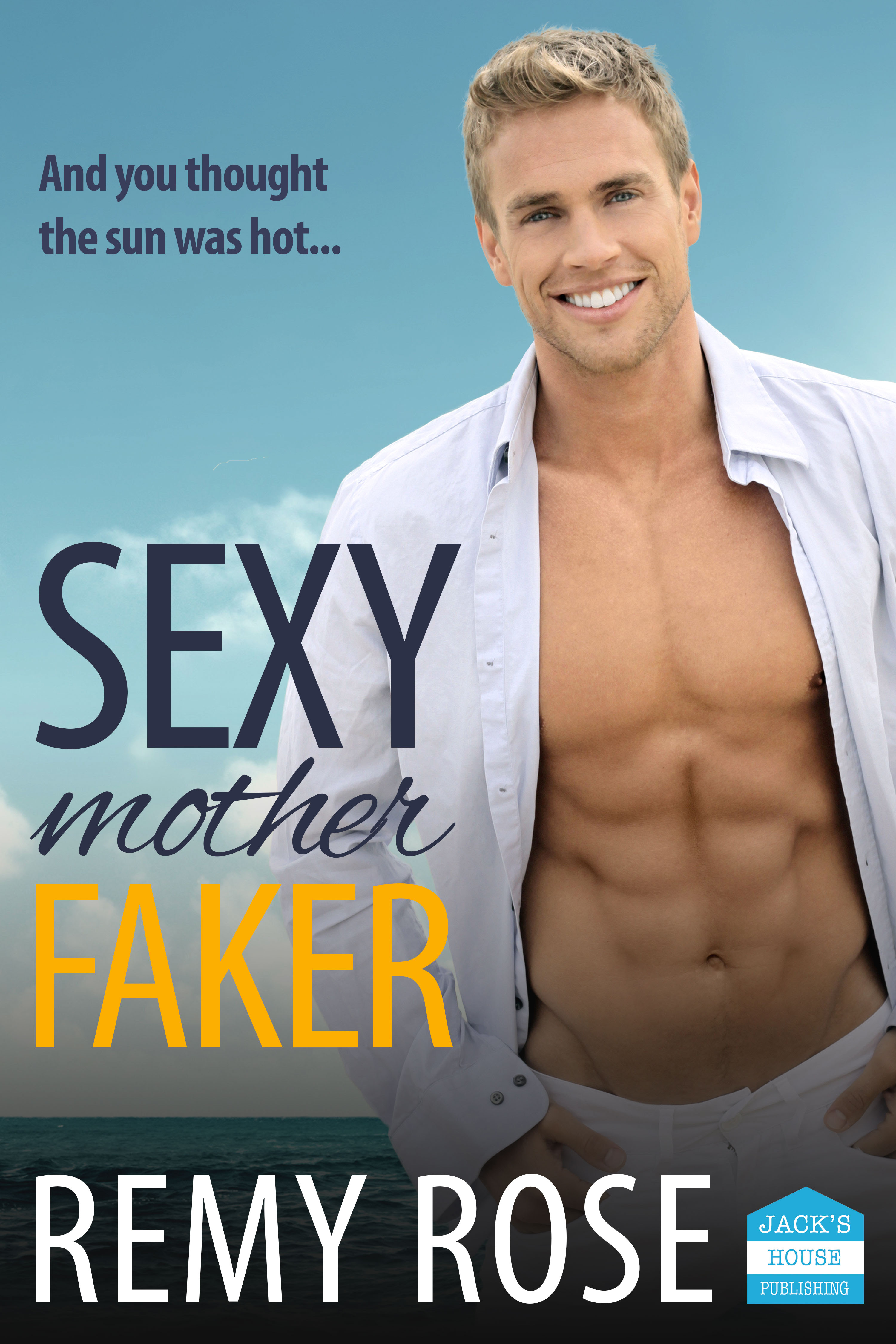 When faking it becomes aching for it…

Damon
They say a bachelor with a big “vessel” is a babe magnet. And you know what? They aren’t wrong. But the CEO of the family yacht company (a.k.a. my mother) is rocking my boat, demanding I bed and wed the heiress of one of our biggest competitors. If my mother doesn’t get her way and decides to fire me, I forfeit millions in trust fund money. So there’s that.

Salvation comes in the form of Delaney Brewster, who just happens to need an investor. In exchange, she agrees to help me stave off Mommie Dearest by pretending to be my girlfriend. It’s a crazy faking idea, but even crazier? My heart is telling me that spunky, sexy Delaney could be the real deal.

Delaney
It’s not an overstatement to say my 9-to-5 equates to lying underneath a hairy fat guy and faking an orgasm. I desperately want to start my own business, but my cash flow…isn’t. Until Damon Cavanaugh makes me an offer my bank account can’t refuse.

Pretending to be his girlfriend should be easy, since I’ve sworn off serious relationships. And let’s face it, he’s easy on the eyes. But the more I get to know Damon, the less it feels like acting. And when his mother steps up the pressure, the gloves—and the masks—have to come off, exposing the one thing I swore to protect…my heart. 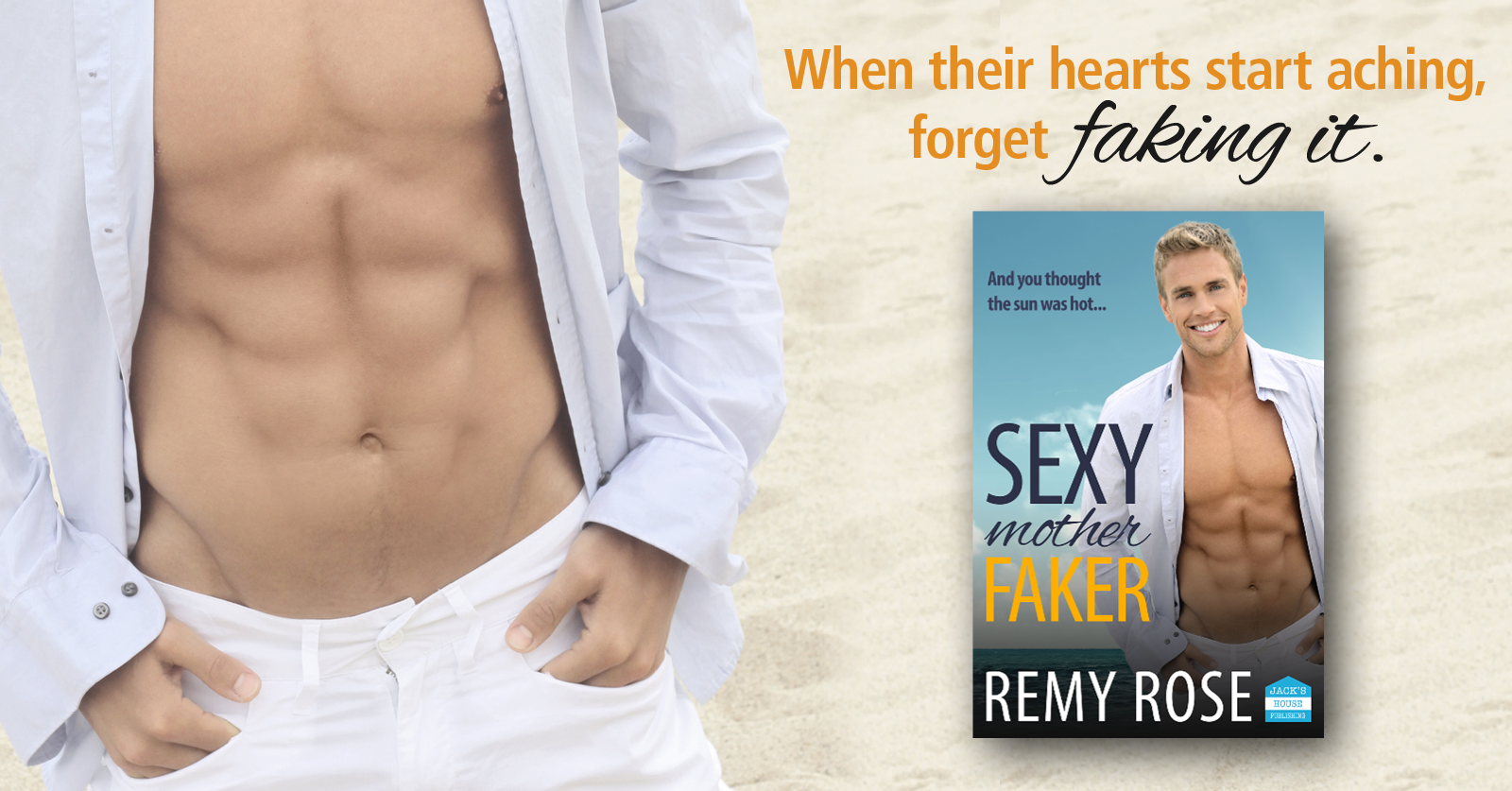 By day, Remy Rose is a pure-as-snow teacher, but by night, she tucks the teacher away to release her alter ego of romance author. Remy shares many things about her outside life with students, but this isn’t (ever going to be) one of them.

A writer since the age of ten, she’s traded her spiral bound notebook and yellow beanbag chair for a MacBook Air and desk, but her love of the craft is still the same. Her first women’s contemporary novel was represented by a New York agent, and she’ll never forget the day she got that phone call while in the bedding section of Target.

Remy is thrilled to be part of Jack’s House, is brimming with ideas for future books, and got a kick out of writing this in third person.