Today we have the blog tour for The First Rule of Hook-Ups by Nina Crespo. Check it out and be sure to grab your copy today! 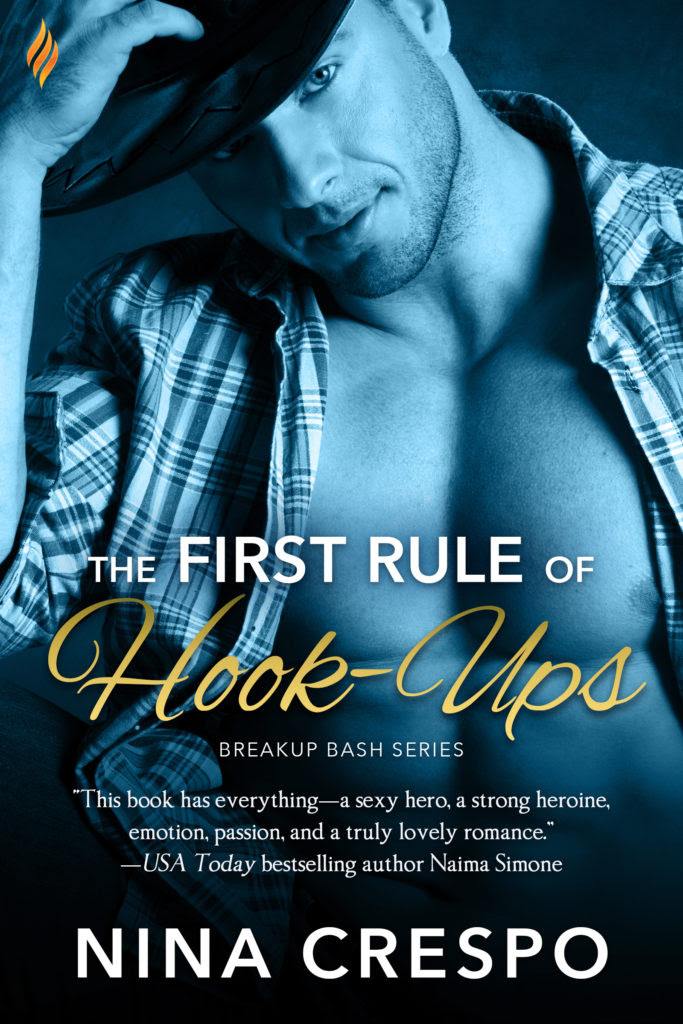 Title: The First Rule of Hook-Ups

About The First Rule of Hook-Ups:

Someone once told me that there are worst things than being left at the altar. Well, not many, in my experience. That was six months ago, though, and my life has moved on. Heck, I have a new job lined up and I'm leaving town.

But, I can't deny that my love life kind of sucks.

That’s why I let my friends convince me to join them for Club Escapade’s Breakup Bash. And we might just be disillusioned enough to actually enjoy it. Last time we were here, it was for my bachelorette party. That night, I met one of the dancers – Raphael – and when he flirted with me, I almost forgot I was engaged. And there's a part of me that never forgot him.

Now, it seems my friends have wandered off and I’m thinking about calling it a night. Until the music begins and I see Raphael, my secret fantasy, on stage. And this time, I’m definitely not engaged...

Raphael and Alexa have their first argument and learn how to make up.

She held it away. “It’s rude to take someone’s coffee.”

“Is it? What about cheating on your husband, boyfriend, or whoever that was?”

Shock and sadness momentarily shadowed her expression. “I’m not a cheater. Brad, my ex-fiancé, was.” She plunked the cup on the nightstand, whipped back the covers, and got up.

The dark brew rocked dangerously close to the edge.

Hell. He hadn’t considered the guy she was supposed to marry had turned into a jackass. Rafe set his coffee next to hers. He snagged her arm before she reached the bathroom. “I shouldn’t have made an assumption about who you were talking to on the phone.”

Alexa’s gaze remained on his chest, but she let him pull her close. Her cell phone jingled. Concern overshadowed her defiant expression. “I’d better get going.”

The prospect of engaging with whoever called had dimmed the radiance that had grabbed him the first time he’d laid eyes on her.

On impulse, he cupped her face. “Not until you accept my apology. I’m sorry.” He kissed her.

Little by little, the rigid line of her lips softened, and she leaned against him.

Warmth and sweetness saturated his mouth as he plunged his tongue into hers and conveyed what he wasn’t saying aloud. He was sorry. Sorry for trying to take her coffee. Sorry she had to leave and deal with whatever weighed her down. But he wasn’t sorry that Brad had fucked up. Did that make him a bastard right along with her ex? Rafe grasped her hips and pressed his rigid cock against her. All he had to do was free himself and glide into her softness and heat.

He’d bring them both pleasure and erase her unhappiness. She eased back. “I can’t be late.”

“I’ll make it worth your while.” He nuzzled and nipped her throat. Yeah, his intention was to enjoy one night with her and move on, but kissing Alexa was a game changer every damn time. She’d remained in his mind, ever since the first time he’d laid eyes on her. He needed to figure out why. After he got her back in bed.

Nina Crespo lives in Florida where she indulges in her favorite passions — the beach, a good glass of wine, date night with her own real-life hero and dancing. Her lifelong addiction to romance began in her teens while on a “borrowing spree” in her older sister’s bedroom where she discovered her first romance novel. Let Nina’s sensual contemporary stories and steamy paranormal tales feed your own addiction for love, romance, and happily ever after.