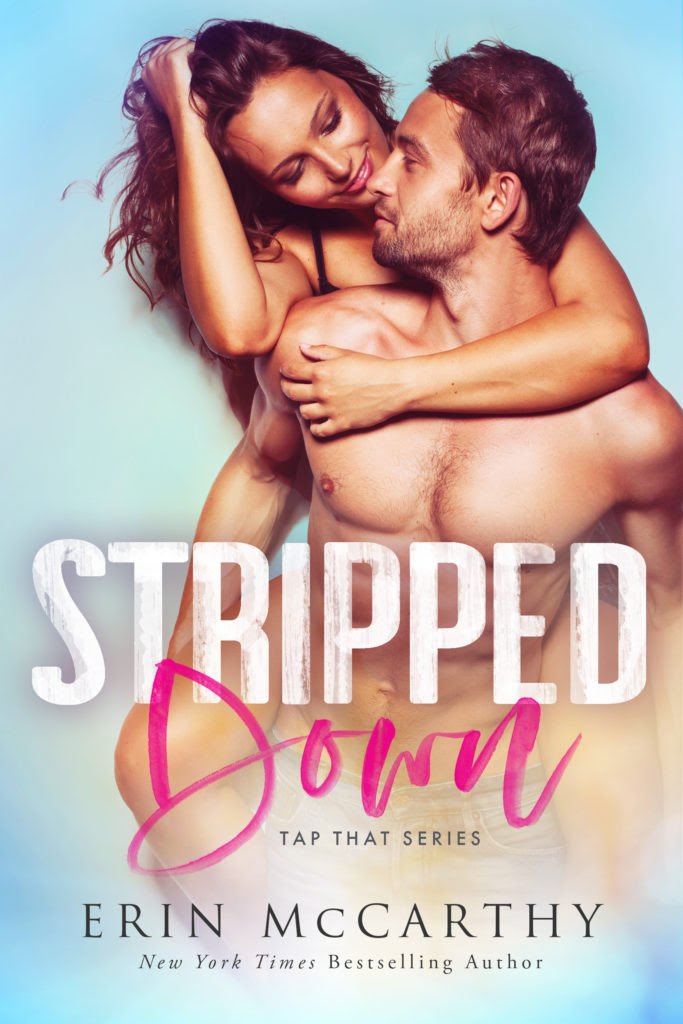 About STRIPPED DOWN (Tap That #1)

And one forbidden kiss in a bathroom in high school…

Sloane O’Sullivan is returning home to Minnesota, dreading turning thirty. Once the Mean Girl, she’s a lot more humble these days. And shocked to see how Little Dickie is all grown up and hot as hell, stripping at a charity event like he was born with biceps.

Working out has shed Rick Ryder of his despised childhood nickname. Now he leads a simple life. Work on cars, take care of his kid sister, have casual hookups. But when Sloane comes back to town single, he wants to finish what they started in that bathroom twelve years earlier.

It was complicated back then. It’s even more so now.

Because Sloane wrecks his bike.

And he’s her landlord.

And her brother will murder him if he has sex with her.

But sometimes you have to strip it all down to see what was there all along… even if it’s a secret.

Lilly jumped into the front passenger seat, which left Sloane climbing into the back seat with Rick. He smiled at her and reached over and gave her knee a squeeze. She didn’t know how to interpret that. That was a promising sign, right? She’d been out of the flirting game for a long time.

As far as she was concerned the ball was in Rick’s court because she’d thrown it out there. She kind of hated that though. She’d always gone after what she had wanted and now she was being so tentative. Ugh.

Ignoring Rick while she tried to find her mojo, she asked Lilly, “Where do you live? I’m in the apartments on Main over the pet grooming salon and the auto shop.” Which reminded her. That had to be Rick’s shop. How many auto body shops were there in Beaver Bend? It was directly underneath her, in the same building. He would be working there while she would be working at the pet salon right next door. The thought made her more excited than it should. Honestly, she hadn’t been this excited since Netflix started dropping full seasons of hit shows at once.

“Oh, God, I’m way out in the boonies,” Lilly said. “We should drop you and Rick off first then.”

“Where do you live?” she asked Rick.

“Really close to you.”

That meant she was likely to be running into him all over town on a regular basis. She wasn’t sure if that was a good or a bad thing. She was leaning toward good.

“How cool,” Lilly said. “You can borrow a cup of sugar whenever.” She rattled off her address to the driver.

“Lilly, we’ll ride out with you,” Rick said in a firm voice. He gave Sloane a look that she interpreted to mean that he wasn’t cool with Lilly riding out into the country at night with a total stranger, hired car service or not. Sloane had to agree. “Exactly.”

Except that it was a long ride and Rick’s hand was back on her knee. Like a big torturous oddity that was both disconcerting and arousing. He had very large hands. The weight wasn’t light. It was solid, heavy. Manly. What could he do with those hands?

Sloane wanted desperately to squirm but at the same time wanted to be so damn cool that she gave the appearance of being completely unaffected. Nor did she want Lilly to have any sort of opinion about it, either positive or negative. Lilly was chatting away about the upcoming Fish Festival, a Beaver Bend tradition in late August. Sloane had always thought everything “small town” was so cheesy. Funny what a few years could do to change your perspective.

Rick was moving his thumb up and down in what was now a caress of her thigh, just above the knee in a way that made her all too aware of how long it had been since her thigh had been touched. Or anything north of her knees. Or any of her. Rick’s hand was callused from his career choice and it created a hot friction. Back and forth he stroked her in a way that made her want to moan out loud. She could hardly concentrate on Lilly’s conversation.

The second Lilly got out of the car and they watched her go into her ranch house, Sloane turned to Rick. He was driving her crazy and she couldn’t keep quiet another minute. “Are you scared of the dark?”

He looked genuinely confused. “What? No. Why?”

“Because you seem like you’re scared and need to hold on to something.” She looked pointedly at his hand on her leg.

Rick laughed and it was a low, seductive sound that made her shiver. “Trust me. I’m not touching you because I’m afraid. And I’m pretty damn sure you know that.” He leaned closer to her, his shoulder brushing hers. “Hey, Sloane?”

Her mouth went dry. She was very aware of the driver in the front seat, a seemingly nice man in his fifties who was studiously ignoring them. “Yes?”

Rick was eyeing her intently, his gaze dropping down to her lips.

His jaw was chiseled, his brow strong. His eyes, which she had never once made note of in high school, were an intriguing green. He leaned in even closer so that his breath tickled her cheek. Sloane shivered.

Rick murmured in her ear. “I’m going to prove it to you so long and sexy and hot that you won’t have any doubts.”

Wow. Her nipples instantly went hard and she pulled in a deep breath. She knew what he meant. “Oh, really?” she asked. “And when is this going to happen?” Her whole body felt warm, liquid, and it wasn’t the tequila. It was anticipation and desire.

“As soon as we get to your place.”

Yep. There it was. She cheered herself for sending that text. She wanted to kiss Little Dickie. The irony of that was not lost on her. She pulled back slightly so she could give him a smile. It had been a long time since she’d felt this sassy. It was welcoming an old friend back home. “Are we taking bets? Vegas odds?”

The corner of his mouth turned up. “What’s the fun in betting on a sure thing?”

Oh, he was smooth. She’d give him that.

He jerked his thumb behind him. “And look, we’re here.”

It almost felt prophetic. “Yes. We are.”


Get your hands on STRIPPED DOWN by Erin McCarthy for FREE for a limited time! 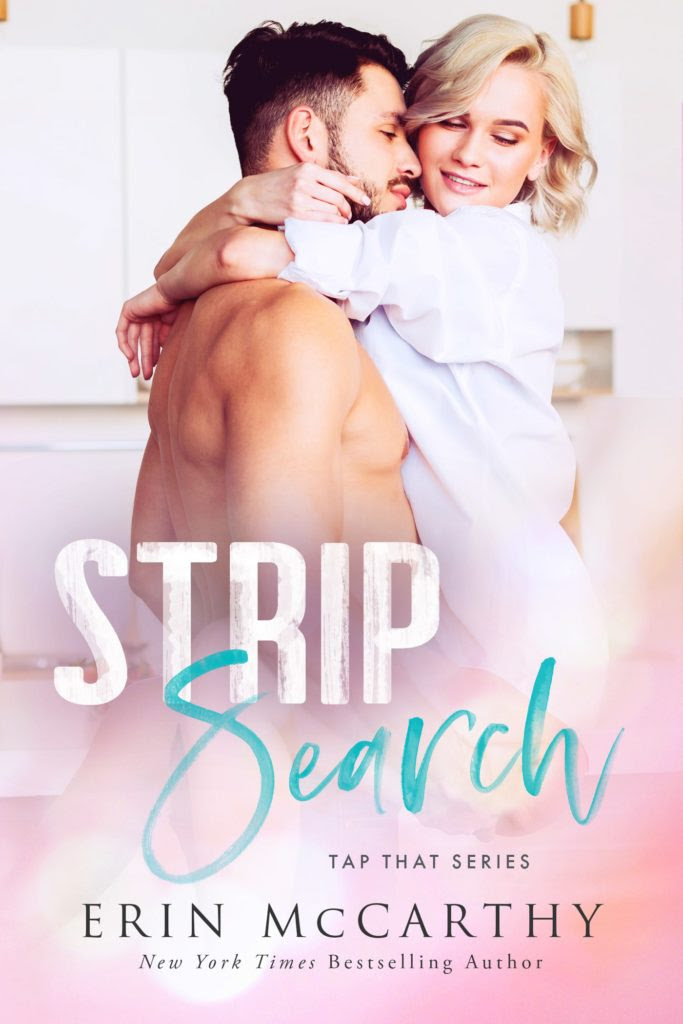 About STRIP SEARCH (Tap That #2)


And a live-streaming kiss that threatens both their careers.

Cop Axl Moore is pretending to be a stripper for charity. But the cute blonde pulled up on stage seems to think he is the real deal.

When Leighton, director for the reality show Wedding Crashers, gets stopped by a cop she swears is actually a stripper, she's determined to put the "f" in fun to save her job.

But their surprisingly potent kiss is caught on camera.

How do you recover from that?

Get your hands on STRIP SEARCH today! 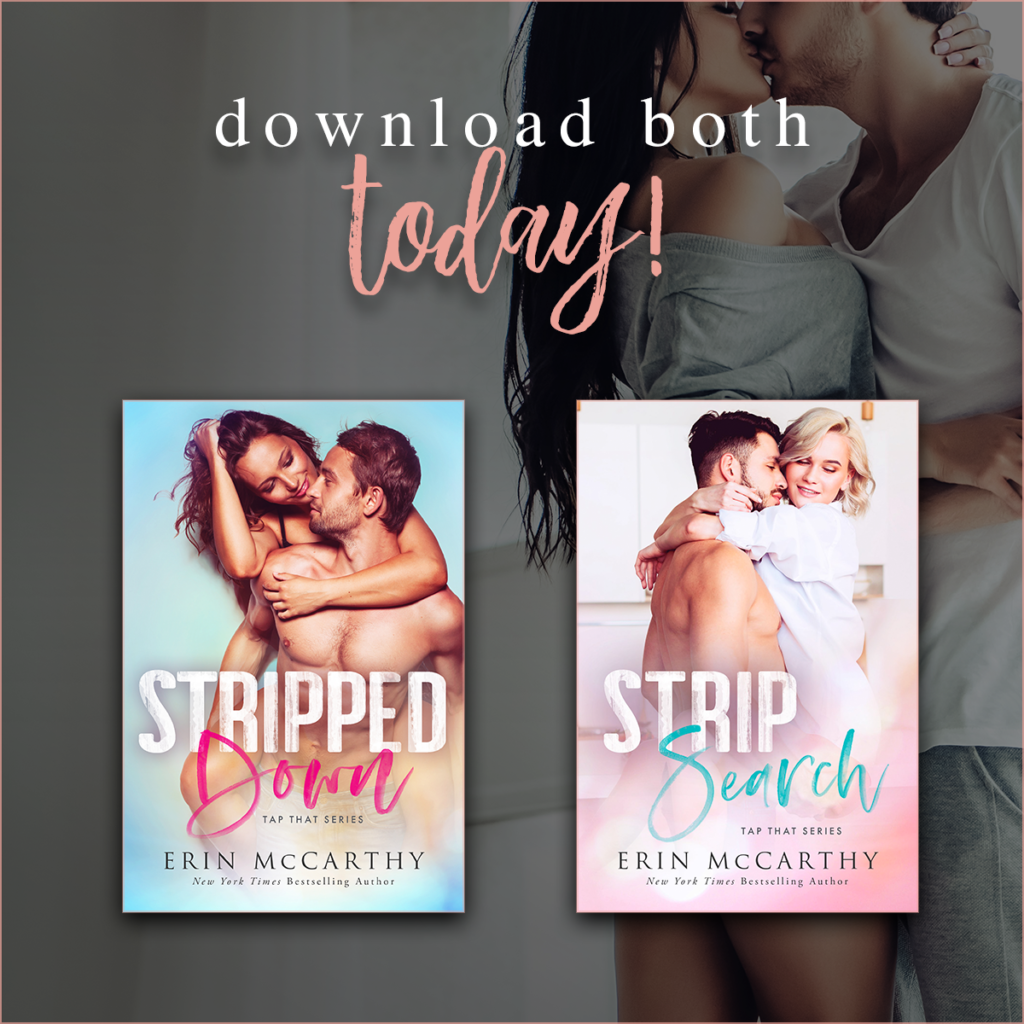 USA Today and New York Times Bestselling author Erin McCarthy first published in 2002 and has since written over sixty novels and novellas in teen fiction, new adult romance, paranormal, and contemporary romance. Erin is a RITA finalist and an ALA Reluctant Young Reader award recipient, and is both traditionally and indie published.

When she’s not writing she can be found sipping martinis in high heels or eating ice cream in fleece pajamas depending on the day, and herding her animals, kids, and amazing renovation-addicted husband.