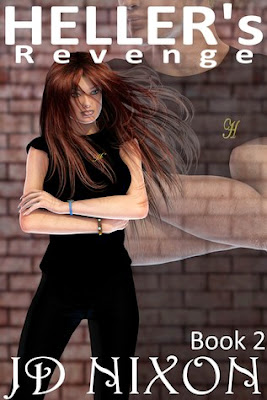 I'm enjoying this series, but I found this book to be very frustrating. There were so many great parts, but at points I thought it was a bit over the top and I was not loving bed jumping Tilly.

This book had a totally different feel from the first book, but sometimes I don't love the second book as much as the first and then they get better for me. I'm hoping (and pretty sure) that this will be the case.

Heller, Tilly Chalmers’ boss, has a score to settle with Tilly's brother, Brian. The way he settled the score was not to my liking, nor was the confrontation that Heller and Brian had.

Tilly is now and official Security Guard and once again is given the oddest security jobs where she gets in all kinds of dramas and predicaments She is tasked with crowd control at a lingerie parade and instead ends up in the Lingerie Show. She is an escort/security office for a Gaming IT man, with roving eyes and lastly and most sadly, she is given the job of standing with a famous environmental activist, who lost his girlfriend to this cause and knows his time on this earth is limited, but wants someone to witness his death.

Heller is a temptation for Tilly, but Tilly spends any time that she is not spending with Niq and Daniel with her boyfriend. In that department there are also a few shocks.

Suffice it to say that I love this series and am definitely continuing, but so far, this was not my favorite book.