THE GIRL FROM THE TRAIN ~ IRMA JOUBERT --> BOOK REVIEW 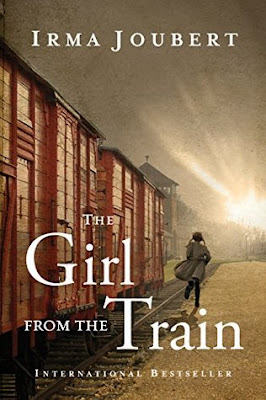 All I have to say is WOW!

The bridge is blown up and the trains falls and bursts into flames. At the time, Gretl has no idea that the remainder of her family are dead, with the exception of her sister who soon dies. Gretl is taken in and the family that has her does not want a German Jew among them and say they can barely afford to feed their own.

Due to some guilt, Jakob takes Gretl along with him. They build a friendship and trust, but about 3 years later he can no longer care for her and as he is taking her away, reads an article that changes both of their lives. Gretl is sent to an orphanage where she is adopted by a South African couple who are Protestant and taken to their country.

Gretl leads a beautiful life with her new adoptive family. She fits in but at the back of her mind she knows she is a German Jew and is afraid that the knowledge will make her new family not love her.

Years later when she is in college, she reconnects with Jakob, but can the friendship they had withstand the telling of her story and her heritage.

This is a story of love, redemption and a time in our history when cultural boundaries where more difficult to penetrate.

This is my first book by Irma Joubert and I cannot praise it highly enough. I was entranced with the story from the beginning and could not put it down as my heart raced to see what would happen next.