When Kate
Watts abandoned her law career to open a food pantry in Northeast Minneapolis,
she never dreamed it would be this difficult. Facing the heartbreaking prospect
of turning hungry people away, she is grateful for the anonymous donations that
begin appearing at the end of each month. Determined to identify and thank her
secret benefactor, she launches a plan and catches Ian —a charismatic hacker
with a Robin Hood complex—in the act. 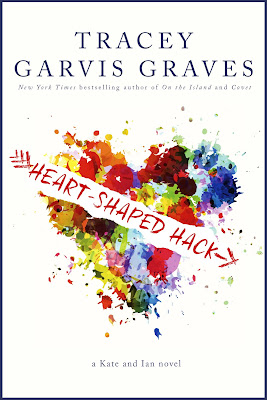 Ian
intrigues Kate in a way no man ever has. But after learning he’s snooped around
on her personal computer, she demands retribution. Impressed with her tolerance
and captivated by her spirit, he complies and begins to slowly charm his way
past her defenses. Time spent with Ian is never boring, and Kate soon finds
herself falling for the mysterious hacker.
But Ian
has enemies and they’re growing restless. In the hacking world, exploiting a
target’s weakness is paramount, and no price is too high to stop an attack. And
when Kate learns exactly how much Ian has paid, she’ll discover just how strong
her love is for the man who has hacked his way into her heart.
Add to Goodreads
AMAZON      Barnes & Noble     iBooks
© 2015 Tracey Garvis Graves
Heart-Shaped Hack
EXCERPT 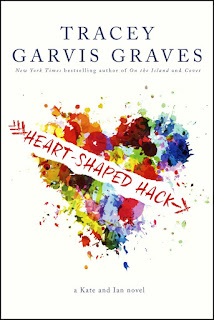 “Imagine running into you here.”

“This is quite a coincidence.”

“It’s not a coincidence at all. I knew you were following me.”

“I spotted you hiding behind the plant when I walked into the bank. Plus I could smell your perfume as soon as I stepped out here.”

“Did you”—she used her fingers to make little air quotes—“appropriate money from this bank?” she whispered.

“Of course not. I do all my work from the Batcave. Believe it or not, I actually bank here. I was just signing some papers.”

Kate had never seen a man look so utterly scrumptious while wearing glasses. There was something about the combination of his hair, his scruff, and the semi-rimless designer frames that made him irresistible. “Are the glasses a disguise? Because I totally knew it was you.”

“The glasses are real. I often suffer from eyestrain since I spend so much time on the computer, and I was up late last night, working.”

“They make you look very smart.” She took a moment to imagine how his scruff would feel rubbing against her skin if he were to kiss her.

“I am smart, but I think you mean devastatingly handsome. More so than normal, that is.”

“Ready?” He walked to the door and held it open for her.

“Follow me.” He looked at her and laughed. “That shouldn’t be a problem for you.”

They took the elevator to the basement, and when the doors opened to the parking garage, Kate followed Ian to a row of cars. He stopped beside one and pulled a set of keys from his pocket.

“My brother Chad was obsessed with this car. He used to have a poster of it on his bedroom wall. There were only six built between 1964 and 1965.”

The last authentic Shelby had sold at auction for around seven million. Ian’s was obviously a replica, of which there were quite a few, but it was still a very notable vehicle with a price tag that started in the low six figures. “Helena called it an old blue car.”

He grinned, looking contemplative. “Technically, that is correct.”

Kate could not resist running her hand lightly over the Guardsman Blue paint and the white racing stripes on the hood. The Shelby was unmistakably race-car-like in appearance with its aerodynamic design and unique body style. Chad was going to be so jealous. “For someone who values his privacy, isn’t this a bit ostentatious?”

“Rakishly handsome playboy who makes grand philanthropic gestures and drives a flashy car. Any of this ringing a bell?”

“Well, if the Prada loafer fits. Wouldn’t you fly under the radar more easily in, say, a Ford Focus?” she asked.

“A Ford Focus? You want me to tool around town in a Ford Focus? Jesus, would I still have my balls?”

“No, they cut them off when they hand you the keys. Of course you’d still have your balls. What kind of question is that? This conversation has gotten way off track.”

“Maybe we should go back to talking about your car.”

“Why would I want to drive your car?”

“Why wouldn’t you want to drive my car? Can you handle a stick shift?”

She pretended not to hear him. “This is not a good car for Minnesota winters.”

“Horrible, I agree. My other car has four-wheel drive, but it’s not nearly as fun to operate as this one.” Ian dangled the keys in front of her.

He was right. Kate was dying to drive his car and couldn’t wait to see how it handled. She took the keys, opened the door, and reached over to unlock the passenger side for Ian. They belted up, and she started the car.

“Please note that I’m already making good on my promise, Katie. Because I assure you, driving this car will be the opposite of boring.”

Tracey Garvis Graves is a New York Times, Wall Street Journal, and USA Today bestselling author. Her debut novel, On the Island, spent 9 weeks on the New York Times bestseller list, has been translated into twenty-seven languages, and is in development with MGM and Temple Hill Productions for a feature film. She is also the author of Uncharted, Covet, Every Time I Think of You, and Cherish.
Tracey loves to interact with her readers and can be found on Facebook and Twitter.
Goodreads     Amazon Author Page
Posted by Jax's Book Magic at 9:00 AM