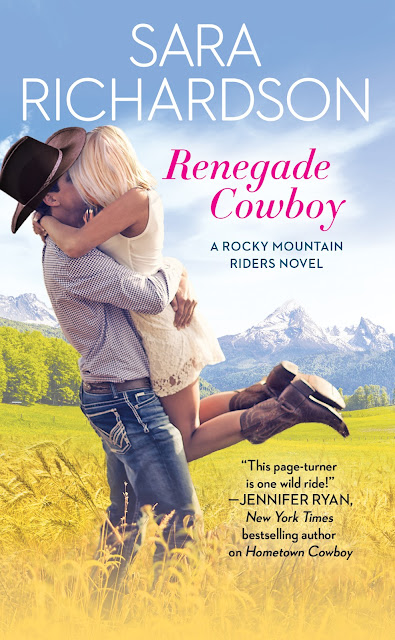 Cassidy Greer knows that cowboys are nothing but trouble. But when her childhood crush comes riding into town, she starts to have second thoughts. Levi's a world-class bull rider now, and more handsome than ever. It's a good thing she's headed out of town soon or she just might be tempted....

As a famous rodeo star, Levi Cortez could have his pick of any woman on the circuit. But when he reconnects with Cassidy, sweet memories come rushing back. Levi knows Cass doesn't want to get roped into a relationship. Not with a cowboy. The only question is, can he convince her he's more than just a renegade cowboy before the summer's over?

Gazing into her eyes, Levi stepped back and pulled his T-shirt up and over his head and then dropped it on the ground.

She did her best not to react, but her eyes widened and her lips parted. He was exquisite. Lean muscle, chiseled detail, broad chest and pecs. The sight was even better than the pictures that were plastered everywhere online. “I thought they’d airbrushed you.”

His head tilted. “Say what?”

“Those pictures they’re always posting on the Internet. Of you without…um…your…um…shirt,” she stammered, suddenly embarrassed to admit she’d been gawking at him for the past six years. Though with that body of his, it was kind of hard not to.

“You thought they Photoshopped me?” he repeated in mock disbelief.

“Well, yeah.” She thought they did that to everyone. She eyed his chest again. Apparently they didn’t have to with Levi Cortez.

He inched closer, the look on his face almost predatory. “You looked at pictures of me online?”

“Darla forced me to.” Staring at hot men online was one of her friend’s favorite pastimes. Of course, she’d looked him up on her own a few times too. Only to see his stats on the circuit, of course. Not that he should be privy to that information.

“Did you like what you saw?” he asked in a husky voice.

One of her shoulders lifted in a pathetically weak shrug. “Kind of.”

He inched closer. “Do you like what you see now?”

Her gaze trailed down his body. Before she knew what she was doing, her hand brushed his chest and worked its way down his abs. “Mmm- hmmm.”

“Want to see more?” He kicked off his boots, and his hands went to his silver belt buckle.

Whoa. She blinked hard. Wait a minute. Was he stripping? She shook herself awake. “We can’t go skinny- dipping!” She backed away from him, nearly tripping over the chair in the process.

He unclasped his belt. “Why not?”

“Well…” Staring at his chest, she struggled to come up with one logical reason. Rational thought, rational thought…there had to be one in there somewhere. “What if someone else shows up?” Like Dev? “It’s indecent exposure.”

Levi laughed. “It’s private property. No one will show up. Lucas and Naomi hardly ever leave the house anymore, and Lance and Jessa are in Denver for the night.” He pulled her into his arms. “So it’s just you and me, baby.”

BIO:
Sara Richardson grew up chasing adventure in Colorado’s rugged mountains. She’s climbed to the top of a 14,000-foot peak at midnight, swam through Class IV rapids, completed her wilderness first-aid certification, and spent seven days at a time tromping through the wilderness with a thirty-pound backpack strapped to her shoulders.
Eventually, Sara did the responsible thing and got an education in writing and journalism. After five years in the corporate writing world, she stopped ignoring the voices in her head and started writing fiction. Now, she uses her experience as a mountain adventure guide to write stories that incorporate adventure with romance. Still indulging her adventurous spirit, Sara lives and plays in Colorado with her saint of a husband and two young sons. Her first contemporary romance, No Better Man, was released by Grand Central forever 2015.