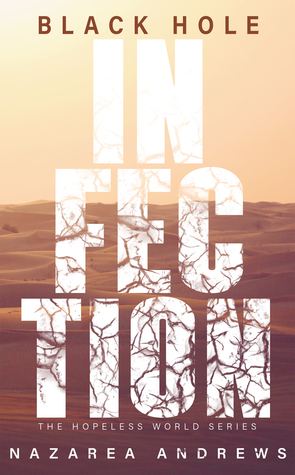 Join Nazarea's newsletter to hear more about the book http://eepurl.com/MtHwj

They thought they knew how the world ends…
Parker has always been other, an outsider in the Last Holdout, a strange almost feral creature that trusted Josiah. Josiah always accepted his strangeness as a strength.
Africa changed everything.
Parker is different here. Dangerous and powerful in a way neither knew he could be. It's terrifying.
But if they are going to survive the continent, they'll need to trust each other--and their reluctant allies--in ways they never have before.
All of Africa is watching them as they change the balance of power.
And the zombies aren't the only things trying to kill them.

“Tomas’ tribe will come for him. They’re fractured right now, without a Malkia,” Zika says quietly, blinking up at me, “They’re dangerous, Josiah. A Tribe without it’s Sauti and Malkia is dangerous and vulnerable. You would do better to walk in with a new Sauti than to wait for them to come to you.”

“Their Warlord would kill Parker,” I say.

She shrugs. “The Candehe is unusual. The Warlord might thank Parker.”

“They don’t have a Malkia. She died a few months ago. It’s odd for a Sauti to keep going after his Malkia dies. They generally turn reckless and get put down by their Dying.”

“Tomas never wanted Gen. He fixated on me when we were children. There is a strong likelihood that it was Tomas who killed Gen.” She says it easily, like murdering a girl to clear the path for Tomas to court her is nothing to even think about, that it bears so little importance that it’s a mere footnote in this conversation.

The more time I spend on this damn rock, the more it turns my stomach and makes me want to bolt, with Parks in tow, to anywhere that makes a little more sense than the mindless savagery that passes as survival here.

“If I take him there, the Warlord won’t let us leave, will he.”

It isn’t a question. Zika’s lips quirk into a wry smile, like she was hoping that I wouldn’t put that little piece of the puzzle together.
“No,” she concedes. “If he did, his tribe would slaughter him.”

I snarl softly and she tilts her head, staring at me curiously. “You can’t survive Africa alone, Josiah. He can’t. You need the strength of a tribe behind him, and he needs the balance of a Warlord and Malkia.”

“And I suppose you’d volunteer for that,” Finn says lazily.

She laughs, a bright noise at odds with the vicious girl I know she is. “Parker has a Malkia, even if Josiah hasn’t accepted that yet.”
She smirks at me and Ren makes a noise, drawing my attention.

“It’s a triangle,” she mutters. “The Sauti, Malkia, and Warlord. They’re bound to each other by more than just choice. The Sauti and Malkia are lovers. A Malkia is more than just the hand that guides the tribe—it’s the hand that calms and tames the Sauti.” Her gaze darts to Zika and the girl nods, a pleased little smile on her lips.

“Who the hell has tamed Parker?” Ren demands, a question that doesn’t even need to be asked.

I was the one who brought a feral boy into the Holdout. I calmed his fury. I made him walk as a man among the last survivors of the apocalypse.
I’ve been taming Parker since the day I met him.

Add it to Goodreads: https://www.goodreads.com/book/show/33380905-black-hole-infection

Nazarea Andrews (N to almost everyone) is an avid reader and tends to write the stories she wants to read. Which means she writes everything from zombies and dystopia to contemporary love stories. When not writing, she can most often be found driving her kids to practice and burning dinner while she reads, or binging watching TV shows on Netflix. N loves chocolate, wine, and coffee almost as much as she loves books, but not quite as much as she loves her kids. She lives in south Georgia with her husband, daughters, spoiled cat and overgrown dog. She is the author of World Without End series, Neverland Found, Edge of the Falls, and The University of Branton Series. Stop by her twitter (@NazareaAndrews) and tell her what fantastic book she should read next.