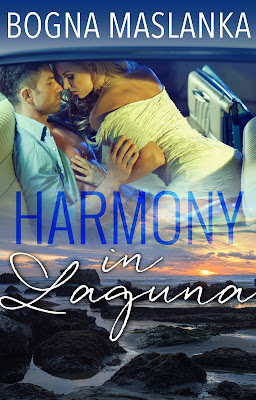 Harmony in Laguna by Bogna Maslanka

Allison Shaw swore she’d never let a man distract her again. Stuck living with her gossip queen of a mother after a bitter divorce from her high school sweetheart, Allison is ready to forge a path by herself. Life decides to throw a wrench in her plans when a night out with an old friend turns steamy.

Benjamin Diaz’s life is just the way he likes it; quiet. But it hasn’t always been that way. After his mothers Alzheimer’s diagnosis threatened to change everything, Benjamin worked hard to return balance to his life. But a chance encounter with a high school crush threatens to change everything.

“When did you move back to Laguna?” Benjamin asked after taking a sip of water. “Last I heard you and Mike were living in Long Beach.”

“We were,” Allison said trying to keep her wince internal. Any mention of Mikey B made her stomach turn. “I moved back here when the divorce was finalized.”

“Don’t be. It’s nice to be home,” She sighed thoughtfully. “It’s nostalgic sometimes.”’

“Except with fewer cameras?” He smirked.

“Yes,” Allison chuckled. “But somehow it still has the same amount of drama. My mother runs with an, uh… interesting crowd.”

“Let me guess,” Benjamin said, shifting in his seat and clearing his throat. “It’s a group of widowed old ladies carousing for a nice rich man, or boy, and they all gossip about their so called rivals?”

“Yes!” Allison blinked at him. “How did you figure that out?”

“They’re probably the same group my mother eavesdrops on at the senior center.” He sighed with a soft smile and shook his head.

“Other than listening to second-hand gossip, what have you been up too? It’s been almost twelve years since we last saw each other.” Allison laughed and took a drink from her wine glass.

“Well, I got my associates in environmental sciences, shipped my little brother off to college and took a job at the community college.” Benjamin shrugged. “I haven’t really done much.”

“Yes, you have!” Allison swatted at him. “You’ve done so much more than I have! How often do you see your mom?”

“Daily,” Benjamin said as he reached for his wine. He took a heavy gulp before continuing. “I’ve been taking care of her for the past few years.”

“Wow, I can’t even imagine. I don’t even think that my mother would ever allow me to take care of her.” Allison said. A smile played along Benjamin’s lips.

“I don’t think it’s ever been possible for my mother to be happy,” Allison mumbled around the rim of her wine glass.

“Yeah, I thought that at one point,” Benjamin chuckled. “But I guess I'm just used to it or she’s given up on trying to fight me.”

“Is she a spitfire?” Allison chuckled and smiled.

“She’s become one. The other day she told me where I could shove it after I wouldn’t let her go to the grocery store at two in the morning.” A wide, toothy smile spread across his face.

Wine nearly dribbled out of her mouth as she broke out into a fit of giggles. “I wouldn’t even know

Hidden in Laguna by Cheryl Phipps

Ballet dancer, Tania Patterson had the world at her feet until a terrible accident destroyed her career. Alone and devastated, after her boyfriend deserts her, she finds her way to Laguna beach, determined to start a new life as a wedding planner.
Braden Dorn was once a sought after piano player. Everyone wanted a piece of him, especially his grasping step-father, and then his world shattered. Now he must pick up the pieces of his life and start again.
For two wounded souls, love might be too much to ask when hearts have been shattered, and self-protection means everything.

‘The one’ can sometimes be hidden in plain sight.

That Gold in Laguna by Heather Hiestand

Treasure hunter Thor Erickson stars in California Gold, a reality TV show. An outdoors buff, he wants to dig for buried gems in the wilderness, not in a rich girl’s Laguna Beach backyard.

Rachel McHughes is an art expert looking for a new challenge. She wants her wealthy father to sell his property so she can leave her job curating the family art collection and take a fulfilling museum position.

The California Gold producers insist the hunt for missing Hollywood Golden Age jewels is good television. The show must go on despite friction between the cast and the McHughes family.

Thor and Rachel can’t avoid each other, or the incredible, sexy chemistry they generate. The treasure they discover might not be gold, but each other.

Jake Cooper has built homes for families in Laguna Beach for years, watching other’s make their dreams comes true. Now it’s his turn to settle down, or so he thought. When his long-time girlfriend breaks up with him, he’s left with the perfect family home, just without the family.
Erin Johnson grew up with very few possessions, the glamorous lives of her high school classmates out of reach. Right as she prepared to start her life, a family tragedy forces her to derail her plans. Ten years later, with her college diploma in hand, Erin’s ready for adventure and freedom from responsibility.
When she meets Jake, she questions everything she thought she wanted.
Is it possible to build new dreams when the right person comes along?

Wed by a Seal in Laguna by Zoe York

Julie Collins fell hard and fast for Lt. Jason Steyner, but actually marrying the guy is proving easier said than done. First the winery they’d picked in Napa burned down, then his next tour of duty got moved up. Now they have four weeks to find a new venue, tell everyone about the change of plans—and oh yeah, get married.

A whirlwind trip to Laguna Beach gets the wedding plans back on track, and gives the Navy SEAL and his flight attendant fiancé a much-needed weekend away from the chaos of work and planning. The countdown is on. One month to go until Julie is wed by the SEAL…

The countdown is on to the first day of the rest of their lives! A SEALs Undone reunion story.

THIS KINDLE WORLD IS TAKEN FROM THE LAGUNA BEACH SERIES BY KAIRA ROUDA.

Kaira Rouda is a USA Today bestselling, multiple award-winning author of contemporary women's fiction and sexy modern romance novels that sparkle with humor and heart. Her women's fiction titles include HERE, HOME, HOPE, ALL THE DIFFERENCE and IN THE MIRROR. Her bestselling short story is titled, A MOTHER'S DAY. Kaira's work has won the Indie Excellence Award, USA Book Awards, the Reader's Choice Awards and honorable mention in the Writer's Digest International Book Awards. Her books have been widely reviewed and featured in leading magazines.

Her sexy contemporary romance series set on INDIGO ISLAND includes: WEEKEND WITH THE TYCOON, Book 1; HER FORBIDDEN LOVE, Book 2; THE TROUBLE WITH CHRISTMAS, Book 3; and THE BILLIONAIRE'S BID, Book 4. Each of these novellas can be read as a stand alone, or enjoyed as a series. Her new series is set in LAGUNA BEACH and includes: LAGUNA NIGHTS, Book 1; LAGUNA HEIGHTS, Book 2; and LAGUNA LIGHTS, Book 3 coming winter 2015. She also helped launch Melissa Foster's The Remington's Kindle World with her bestselling novella, SPOTLIGHT ON LOVE, and is part of Carly Phillips Dare to Love Kindle World with THE CELEBRITY DARE.

She lives in Southern California with her husband and four almost-grown kids, and is at work on her next novel. Connect with her on Twitter, Facebook at Kaira Rouda Books and on her website, KairaRouda.com.