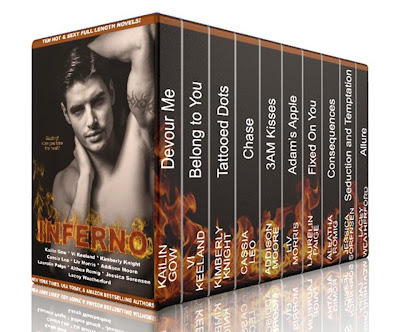 INFERNO: Ten full-length smoldering and fiery romances. Passion so intense they're almost too hot to handle.

Devour Me - Kailin Gow
The Master Chefs dominated in the kitchen as well as the bedroom... Taryn Cummings could not believe she will be studying at the prestigious International Institute of Culinary Arts in beautiful Paris - a far cry from her unglamorous life in New York running her mother's restaurant. A chance meeting brings her face-to-face with devilishly charming Errol King, the notorious celebrity bad boy chef who can have anyone, except Taryn, the woman he wants most.


Belong to You - Vi Keeland
My honeymoon was almost everything I dreamed it would be, a tropical paradise, turquoise water, romantic walks on the beach, and loads and loads of mind shattering sex. The only thing missing was the groom.

After seven years of coasting through a relationship with Michael, my senses were numb. A week of passion with a stranger was just what I needed to clear my head and take back control of my life. But how do you move on when the man that was only supposed to be a fling somehow seeps into your soul and steals your heart?


Tattooed Dots - Kimberly Knight
Brooke Bradley and Easton Crawford meet on a singles cruise and learn that people are brought into their lives for many reasons. Over time, they find out what those reasons are. Some are to be a temporary acquaintance while others are there for life.


Chase - Cassia Leo
A struggling actress finds herself in over her head when she takes a job as an escort and finds her first client is a sexy, dominating presidential candidate.


3:AM Kisses - Addison Moore
Baya Brighton is looking forward to her first year at Whitney Briggs University, new friends, dorm life, and finally being close to her brother again. Love is the last thing on the list, but when Baya meets her brother's roommate she begins to have thoughts and feelings that make even her blush.

Adam finds this complex woman too tempting to resist & will stop at nothing to have her, yet she is warned to stay away from him and his player ways. But will she be strong enough to hold the charismatic Adam Kingsley at bay?


Fixed on You - Laurelin Paige
A bartender with obsessive tendencies and a billionaire built on dominance come together in a steamy story that explores the line between head games and love-cures-all.

Every action has consequences:

Claire doesn't understand how she ended up in the cruel hands of her abductor, Anthony Rawlings, but it's been made abundantly clear--she is now his acquisition and every action has consequences.

Will Claire follow his rules, or will Anthony become enthralled by Claire? If that happens, will either of them survive the consequences?


Seduction & Temptation - Jessica Sorensen
Daughter of a very powerful drug lord, Lola Anders life has always been dangerous and full of dark secrets. Before Lola can uncover them, she's kidnapped and forced to go through with a murder, by none other than her childhood friend, Layton Everett.


Allure - Lacey Weatherford
Tattoo artist by day, exotic dancer by night, 22 year old Six has been fighting his attraction for the girl of his dreams. Why? She's the high society daughter of the Mayor. Oh, & she's only 17. But what happens in Vegas, stays in Vegas...right?